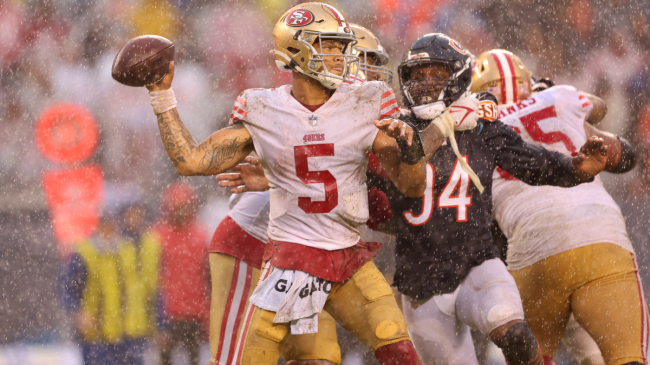 Trey Lance MVP bettors are having immediate regret following the first week of NFL play. The new starting quarterback for the 49ers was one of the most bet-on options to win Most Valuable Player honors this season, but he failed to come through in his opener.

Much of the action was due to his starting odds.

Lance began the offseason sitting around +2000 to nab an MVP at most sportsbooks. Many believed that there was value in taking a chance on the first-year starter after San Francisco announced that he’d be leading the team in 2022. After all, the Niners nearly made the Super Bowl with Jimmy Garoppolo under center the year prior.

After the offseason line movement was done, Lance’s MVP odds had skyrocketed. Here’s more from ESPN’s David Purdum on the ‘curious’ situation.

“He opened at 200-1 to win MVP at Caesars, a lofty price for a starting quarterback on a perceived Super Bowl contender. His odds improved to 40-1 ahead of the season.”

But after Week 1, many of those bettors could be having buyer’s remorse.

Lance certainly struggled in the season opener, though the horrific weather conditions in Chicago absolutely had something to do with the performance.

The passer completed just 13 of his 28 attempts, throwing for 164 yards and a pick in a monsoon. Not the best start for those MVP hopes.

Trey Lance MVP steam not off to a hot start

There will certainly be overreaction to the season opening loss, particularly with the off-field drama that surrounded the 49ers’ quarterback room this offseason. Still, there could be hope for those Lance bettors when looking back to last year’s MVP.

For the 49er fans that need some comfort, don’t forget this week one game from last year. The losing team ended up being the number one seed, and the QB that threw 2 INT’s and no TD’s ended up being league MVP. And that was in GOOD weather… #49ers #Niners #TreyLance pic.twitter.com/zcJR5cOLeo

But Lance hasn’t proved to be the passer that Aaron Rodgers is at this point.

Things could go a number of ways for San Francisco under center this year. Lance could thrive, with this weather-hindered performance being an anomaly. We could also see him getting benched midseason.

Whatever the case, that preseason MVP money placed on Trey Lance looks to be headed straight to the pockets of the sportsbooks.