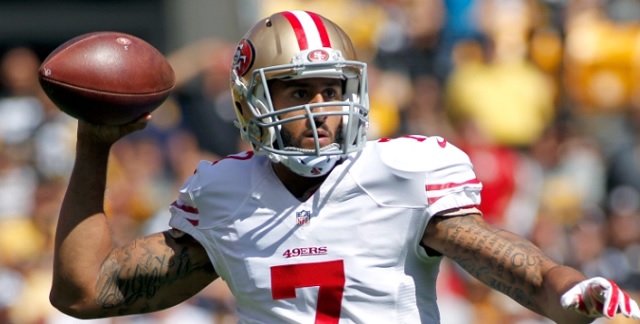 Thanks to an observant fan, Colin Kaepernick will be nominated to the Pro Football Hall Of Fame.

Bob Birkett of Vermont recently discovered that anyone can nominate players, coaches, or contributors simply by writing a letter to the Pro Football Hall Of Fame.

A Vermont man has long been bothered by what he says is “raw deal” Colin Kaepernick got for trying to call attention to police brutality against Black and brown people. So he nominated @Kaepernick7 for the Pro Football Hall of Fame. https://t.co/1NLpGO5pRg

Birkett discovered that anyone, even a retiree from Vermont with no connections to the NFL, can nominate someone for the Hall of Fame. So he sent a letter to the Hall in late June asking that Colin Kaepernick be inducted as a Contributor for the quarterback’s efforts to call attention to police brutality of Black and brown people.

Here’s the exact rule in the Pro Football Hall Of Fame’s website.

The Hall of Fame receives nominations but does not make them. Any person, including the 48 elite members of the Selection Committee, may nominate any eligible players, coaches or contributors.

Any fan may nominate any player, coach or contributor who has been connected with pro football simply by writing to the Pro Football Hall of Fame. The only restriction is that a player and coach must have been retired at least five years before he can be considered.

Birkett says he wanted to nominate Kaepernick for showing courage in highlighting racial injustice in this country.

“It is my pleasure, privilege, and responsibility as a supporter of racial equality to nominate Mr. Colin Kaepernick,” Birkett wrote. “Mr Kaepernick has shown exceptional courage in highlighting the damaging effects of racial injustice on Black people and on our society as a whole. His respectful kneeling posture has created a powerful symbol for those who are oppressed by our society.”

He’s gotten a raw deal for so long,” Birkett told USA TODAY Sports. “It’s a little bit like (Muhammad Ali refusing to serve in Vietnam). The initial reaction was, ‘Holy cow what a horrible thing.’ Then a little while later, it’s like, ‘Man, that guy had some guts.’ ”

You think, ‘What can I do?’ ” Birkett continued. “I can’t force an owner to hire the guy. But darn it! I can put him in the Hall of Fame.”

Unfortunately, Kapernick still isn’t eligible for the Hall Of Fame due to the fact that he hasn’t been out of the game for five years but even then it would be hard to imagine him getting voted in.