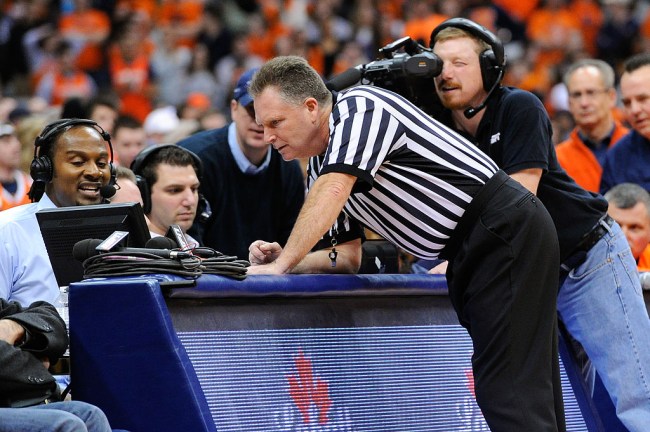 The Saints and their fans went to great lengths to rectify this wrong with supporters filing lawsuits against the NFL and petitioning Roger Goodell in an attempt to have the results of the game changed, and while the league has decided to institute new rules next season, it wasn’t much consolation for the people of New Orleans and beyond.

There are plenty of purists who believe human error is just part of the game when it comes to sports, and while they may have a point, it’s hard to argue we shouldn’t harness the increasingly advanced technology that’s available to ensure the right calls are made in high-stakes situations.

During last night’s national championship game between UVA and Texas Tech, instant replay was deployed on a few occasions—including during overtime, where the refs went to the monitor and spent far too long trying to figure out who deserved to be given possession after the ball went out of bounds with the Cavaliers up by two.

Check out this clip from CBS 2 News at 11 https://t.co/CqGXqjmlf2 #clippit

In realtime, it looked like the ball had gone off a Virginia player, but after spending an eternity looking at the play from multiple angles in super slo-mo, officials determined it had actually scraped the finger of a Red Raider and gave Virginia possession.

While it didn’t necessarily change the outcome of the game, it undoubtedly helped shift momentum in UVA’s favor and plenty of fans were displeased with the decision.

That is somewhat abuse of the replay. Should be Tech ball. Virginia player obviously pushed ball out.

If it’s the 1st half with no replay that’s Texas Tech ball 100 times out of 100, and no one in the arena has a problem with it either

Initially instant replay was implemented to change obvious and clear mistakes. You needed “conclusive evidence”. That’s not what it is anymore.

I’m normally pretty pro-replay, but after watching last night’s game, it seems like college basketball has a bit of a review problem. While you hate to see a team get screwed over by a blatant blown call, it’s equally frustrating when a seemingly obvious ruling is only overturned because the refs got a chance to spend five minutes watching it at 60 FPS.

As things currently stand, there are only a few situations where replays can be deployed. Officials can review footage to correct the clock, determine flagrant fouls, check if a shot counts for two or three points, and, of course, decide on possession.

In theory, there’s no doubt these are all important things to get right but at what point do we say enough is enough?

So what’s the solution here? The most obvious change would seem to be a time cap. The end of college basketball games already last an eternity, and if officials can’t figure out the correct call in less than, say, three minutes, then they shouldn’t be allowed to overturn the original ruling.

Here’s to hoping it does.