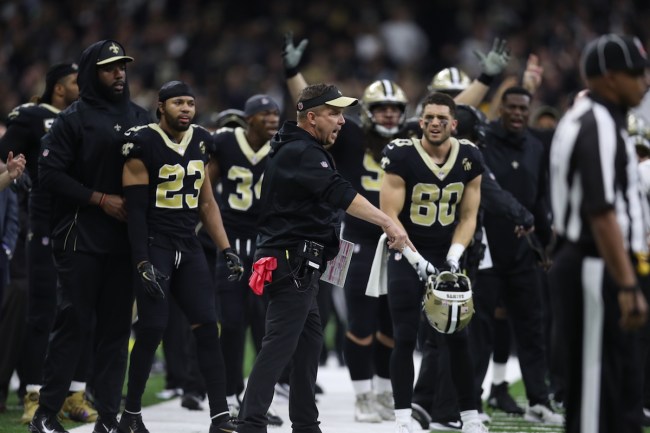 Dealing with losses in life is an unfortunate side effect of the human experience, and while time may theoretically heal all wounds, some heartbreaks are much harder to get over than others.

On Sunday, New Orleans Saints fans went into mourning after their team fell to the Los Angeles Rams in the NFC Championship Game thanks in no small part to the referees who saw this play unfold and apparently didn’t see any need to throw a flag.

In a parallel universe, New Orleans took advantage of the chance to win in overtime and the no-call was quickly forgotten, but in this one, Saints fans have had to figure out how to grieve.

As you’d expect, some people went with the “anger” route.

However, based on what I’ve seen, most people are still stuck in the denial stage— including the guy who bought some giant billboards to air his grievances.

After the game, some Saints fans found a glimmer of hope in an obscure rule that allows the commissioner of the NFL to overturn the outcome of a game that was impacted by an “extraordinary act.”

There is nothing I would love to see more than the shit monsoon that would form if Goodell had the cajones to reverse the outcome of the championship, and as a result, I am very here for the lawsuit that’s been filed against the league in a quest for justice.

According to WDSU, attorney Frank J. D’Amico Jr. (a.k.a. “The Strong Arm”) has filed a civil suit against the league on behalf of Saints season ticket holders in an ambitious attempt to replay the last two minutes of the game.

According to the reporter who broke the story, Goodell also received a letter from two other attorneys urging him to invoke Rule 17 and Mackel hinted there may be more to come.

Update: The first of what is expected to be many lawsuits filed against the @NFL over the #SaintsGotRobbed blown call will be filed Tuesday by #Nola attorney Frank D’Amico, who goes by ‘The Strong Arm’ – D’Amico made the announcement in a news release. More @wdsu soon.