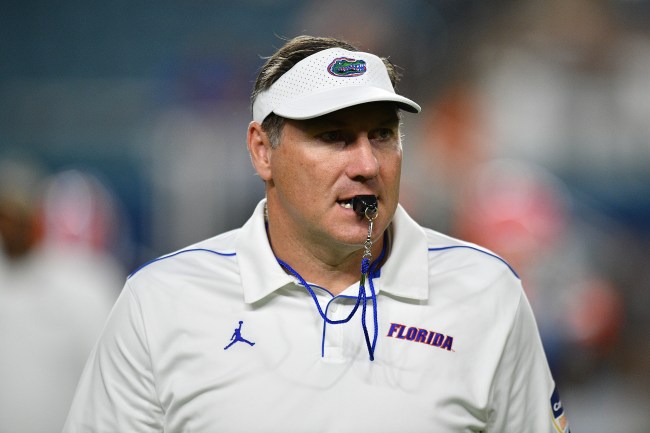 Florida Gators head coach Dan Mullen is pretty salty that the Gators will probably not make the college football playoffs.

On Saturday night,Florida lost to LSU in heartbreaking fashion after Gators DB Marco Wilson committed a boneheaded penalty late in the fourth quarter that helped the Tigers hit a game-winning field goal.

LSU was going to have to punt and then a Florida player threw this shoe. May have killed their playoff chances. One of the dumbest plays I’ve ever seen. pic.twitter.com/wIsllDFvQr

After the game, Mullen was asked if the Gators should make the college football playoff with two losses if the team beats #1 ranked Alabama next week. While answering the question Mullen appeared to take a not-so-subtle shot at Ohio State getting the playoffs after only playing five games while Florida has had to play ten games.

"I guess the best thing to do would have been to play less games because you seem to get rewarded for not playing this year in college football."

After his first loss, Dan tried to shift blame to having a packed stadium. After this one, Dan tries to whine about playing 10 games.

College football fans immediately blasted Mullen for complaining about playing too many games after losing to unranked LSU.

Or just beat a 3-5 team that has like 50 scholarship players at home. https://t.co/IFNkg3u5Qn

Can't wait to see what crybaby excuse he comes up with next Saturday for why Bama waxed UF.

Not shocking that tonight's game swung on an undisciplined decision by a player when you have such a poor example of leadership at the top of the organization. https://t.co/Q1QSMbcGaz

always excuses with this dude. you didn't have your team ready to play https://t.co/g58Mao5FNn

Give the man credit, he comes prepared with excuses for every loss. Gotta respect it. https://t.co/isVRqFcbpU

No accountability after any loss. No blame being put on the defense. Yet we expect things to change. https://t.co/lgTV2izZ3P

Is there BS in Ohio State playing, like, 5 or 6 games and getting a potential playoff berth? Sure.

But did your team just lose badly to an abysmal LSU and that's entirely your fault?