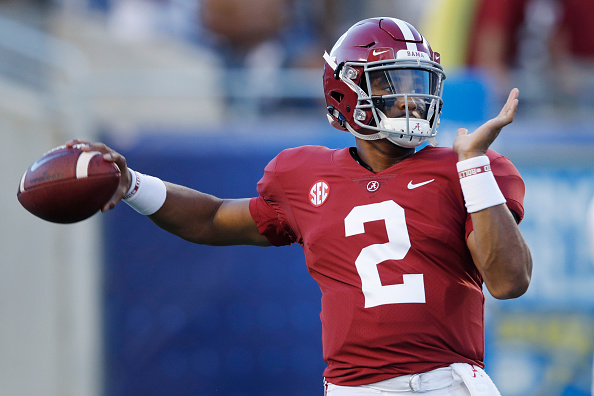 Before tonight’s Alabama-Louisville game, Bama coach Nick Saban was unsure of who was going start at QB for the team this season.

“I think we have two guys that are weapons, and they’ve both played well, so the plan is to play both guys in the game,” head coach Nick Saban told ESPN’s Chris Fowler in an interview that will air Saturday, according to ESPN.com. “So the only issue is who plays first, and we’ll decide that when the time comes.”

Tua eventually got to start and he was spectacular on the field after deliveringg several electric plays while leading Bama to a huge 28-0 at halftime.

Tua lighting it up in the first half 🔥

Hurts was only able to played only for two series’ in the first half but was unable to score and it appears that is future with the team is pretty bleak. After Tua’s huge first half, college football fans from around the country are begging Tua to transfer to their team.

@JalenHurts if Bama just ain’t working for you, @CvilleTigers has a spot open for you. 🤔🤙🏼

@JalenHurts hey you and Jimbo wouldn’t be too shabby 😉 #GigEm

Michigan is really going to turn this thing around in 2019 with Jalen Hurts as the new QB (grad transfer).

@JalenHurts you know, if you want to cause an uproar in the college football scene, you should see about transferring to Auburn.

We will love to have you at Auburn 💙🧡 @JalenHurts

.@JalenHurts come to Georgia Tech. We don’t pass much, but we’ll work something out just for you pic.twitter.com/e5fpWehKzW

@JalenHurts We need a quarterback, and you need a home. Sounds like a match made in heaven to me. #RaiseHeel