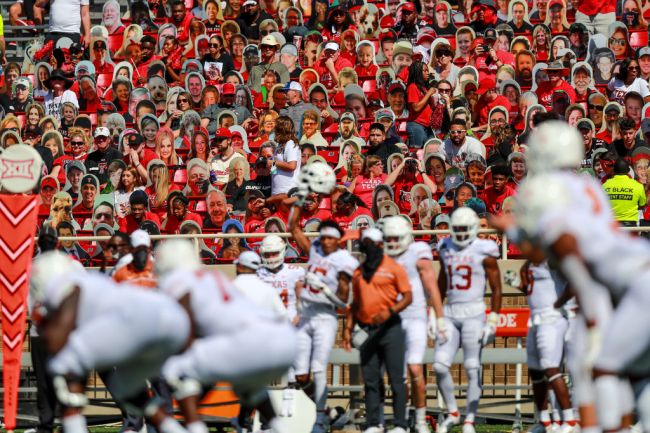 Some universities and state officials are not allowing any fans to attend college football games this season, while others are limiting the number of people allowed through the gates. While capacity limits vary from school-to-school, there isn’t a major football program allowing 100% capacity in the stands, at least not this early in the season.

With stadiums not being anywhere close to full capacity, it goes without saying that home-field advantage is virtually non-existent this season. Playing in front of your own fans as well as going on the road and entering a hostile environment are two of the greatest aspects of college football, especially in Power 5 conferences, but we simply do not get to witness that this season.

We’ve already seen an underdog go out on the road and win in what is usually one of the most intimidating and toughest stadiums to visit with Mississippi State beating LSU in Baton Rouge in the first weekend of SEC action.

LSU isn’t the only home team that’s taken an L at home early on this season. Through four weeks, home teams are winning only 59.5% of their games (47-32). If that number holds, it would mark the worst winning percentage by home teams since 2005 (59.3%), according to CBS Sports. Last season, home teams won 65.2% of their games, the second-best home winning percentage of all-time. It’s quite the contrast comparing this young season to what we saw a year ago.

These numbers are alarming, but we can’t forget that most schools have scrapped non-conference games this season. The Power 5 schools aren’t getting those 2-3 cupcake games at home, which is absolutely going to play a factor in these home-game winning percentages.

Reddit user Bakonydraco actually did some digging on this factor and looked at the 970 Division 1 home conference games last year, a year in which the CBS article suggested had a near-record .6526 home winning percentage, and the winning percentage among that subset was .5577, which is 4% lower than this year’s supposedly low mark.

In summary, home-field advantage is going to take a big hit this season if things continue in this direction, but it may be too early to call whether or not it could be one of the worst winning-percentages of all time.