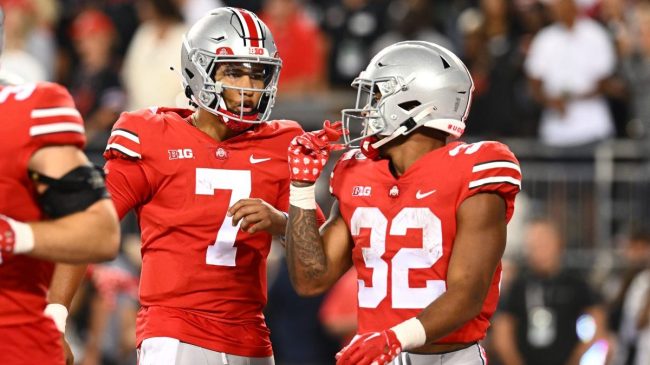 Some of college athletics’ biggest stars are now able to capitalize on their stardom. Many are making sure their teammates are taken care of as well.

But perhaps the most interesting element of it all is group licensing. Teams, schools, and wide swaths of athletes have banded together to sign deals for everything from trading cards, to video games and even jersey sales.

The latter of which dropped for the first time on Thursday, sending waves through the college football world.

Though for the athletes, there’s one pretty significant problem.

Players Get Just A Minuscule Portion Of Revenue For Jersey Sales

Sports apparel company Fanatics is selling replica jerseys of college football players for $140. Of that $140 dollars, the athlete themselves earns just $5.60 (4%). Though they don’t even get to take home that much. Instead, group licensing company OneTeam takes a 30% share.

That leaves athletes with a measly $3.92 profit on each jersey sold.

The #NIL group licensing biz is ripe for disruption.

Then, OneTeam takes its cut of 30% for organizing the group licensing deal. The athlete is left with $3.92. Crazy.

Someone like Ohio State quarterback CJ Stroud stands to make tens of thousands of dollars on jersey sales. But he also stands to lose out on much, much more.

Though not all schools agreed to the same deal.

Michigan athletes earn $20 per jersey sold through a partnership between @TheMDen and @valiantuofm.

Valiant organized the group and takes a $0 fee on each sale.

More disruption is coming to the #NIL group licensing space. Count on it.

The numbers shocked many fans. And some even stated it would keep them from buying jerseys from Fanatics.

Wow. If this is the case, I’ll be keeping my money. Not spending $140 for a College Athletes jersey only for them to get a whopping $3 from my purchase. That’s ridiculous. https://t.co/fqsYFh3slX

Agents for some college athletes are pulling their clients out of OneTeam's group licensing agreement.

Brandr, another group licensing company, offers roughly $10 per jersey compared to OneTeam at less than $4.

But even Brandr is taking 20% off these deals. Change is needed.

The revelation is just another example of the ever-changing NIL landscape in its first years of existence.