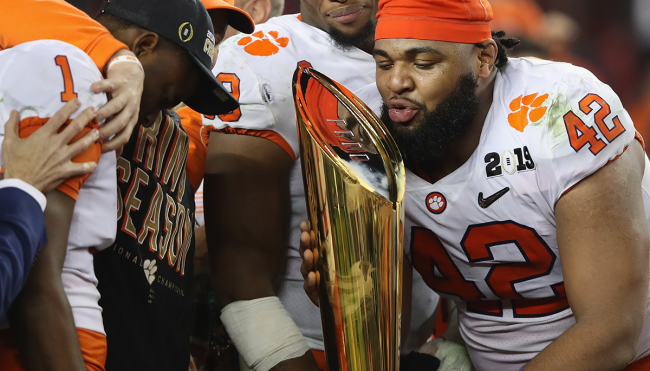 The NCAA arguably perfected the art of the postseason when it expanded March Madness to 64 teams in 1985, but college football fans spent decades sort of just accepting the impressively broken system that was used to crown a national championship at the end of the regular season.

In 1998, the organization revamped a system that had traditionally relied on coaches polls to pick the two schools worthy of competing for the crown each year with the introduction of the Bowl Championship Series and the mysterious algorithm tasked with deeming who deserved a spot in the title game.

However, that solution left plenty to be desired. In 2014, we got yet another upgrade in the form of the College Football Playoff. In theory, the change gave more teams a chance to get in on the postseason action, but in practice, it’s really just forced Clemson and Alabama to play an extra game before the matchup we would’ve gotten in previous eras.

As things currently stand, it’s essentially impossible to earn one of the four CFP spots unless you’re a member of a Power Five conference. As a result, that’s led to smaller schools like UCF being deprived of the chance to prove they can hang with the big boys, and there’s been plenty of discussion concerning how to address that glaring issue.

Now, it appears the College Football Playoff has dreamed up a potential solution, as The Athletic‘s Nicole Auerbach reports a subcommittee has recommended expanding the playing field to a total of 12 teams.

ESPN got its hands on a proposal that was put together by a subcommittee of conference commissioners and athletic directors and shed a bit more light on what could be in store.

As things currently stand, the plan would grant a bid to the six of the ten conference championship winners sporting the highest ranking when everything wraps up. They would then be joined by six more teams handpicked by a CFP selection committee, and the postseason would unfold as follows:

The four highest-ranked conference champions would be seeded 1-4 and receive a first-round bye. Teams 5-12 would play each other in the first round on the home field of the higher-ranked team.

The quarterfinals and semifinals would be played in bowl games, and the national championship game would remain at a neutral site.

The new format will be weighed when members of the CFP committee convene in Chicago for a meeting next week, so while it’s nowhere close to being set in stone, it’s hard to argue it doesn’t have some incredible potential.

Could it ultimately just result in Alabama and Clemson still playing each other in the championship for the next decade? I mean, yes, but at the same time, I don’t really see any downsides here. You could make the argument that it could negatively impact players who will have to play a couple of extra contests to make it to the title game, but I have a hard time imagining there are many athletes who would prefer not even having that chance in the first place.

It’s worth noting any changes wouldn’t go into effect for a few years, but I think it’ll be worth the wait.