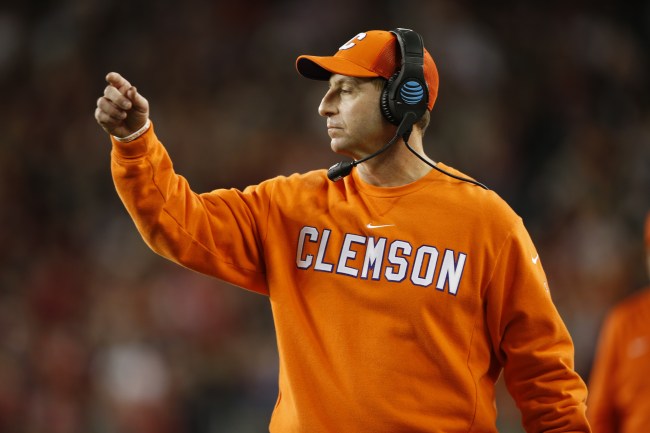 College Football is only about six weeks away, meaning, if you’re anything like the rest of America, you’re already getting amped about what the season has in store. Will Trevor Lawrence and his Clemson Tigers pick up where they left off after the national title last year? How will Alabama bounce back after getting rolled in the National Championship Game? What’s Ohio State going to look like with new coach Ryan Day at the helm as he replaces Urban Meyer? Does Oklahoma have another Heisman Trophy winner under center in Bama transfer Jalen Hurts? These are just some of the storylines heading into the new campaign.

While nobody knows for sure what the upcoming college football season has in store, it’s always fun to at least try to predict what might happen, right? In the spirit of doing so, ESPN’s College Football FPI projections were updated as the new season approaches, hoping to identify the favorites to reach the College Football Playoff this year. So, who should fans keep their eyes on and (just maybe) throw some money at when sports gambling, if that’s your thing? Take a look below at the top-15 teams from ESPN’s predictions, with projected wins and losses in parentheses.

For those who noticed, that means that, according to ESPN’s College Football FPI projections, only four teams will win double-digit games this upcoming season, with three of them — Clemson, Alabama and Oklahoma — all having been in the College Football Playoffs in three of the past four seasons. The fourth team on the list, Michigan, has never reached the CFP, so it’ll be interesting to see how close these predictions actually are.

So, how did ESPN land on these predictions with its FPI simulations? Here’s how it’s explained by the Worldwide Leader.

“The Football Power Index (FPI) is a measure of team strength that is meant to be the best predictor of a team’s performance going forward for the rest of the season. FPI represents how many points above or below average a team is. Projected results are based on 10,000 simulations of the rest of the season using FPI, results to date, and the remaining schedule. Ratings and projections update daily.”

Yep, ESPN really does some hardcore simulations in order to try and give fans the most information, don’t they? Now, whether or not this all comes true is left to be seen, but at least we’ve all got some idea as to which teams could be the favorites for the national title — so bring it on, college football, we can’t wait to have you back.