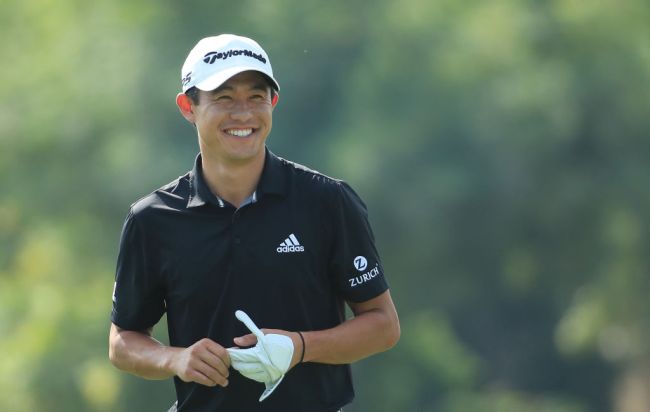 Collin Morikawa was unphased by almost everything during his come-from-behind win at The Open on Sunday. The fact that it was the 24-year-old’s first appearance at The Open didn’t seem to matter nor did the challenge of holding off Jon Rahm, Jordan Spieth, and Louis Oosthuizen.

He did, however, back off of his tee shot on the 72nd hole. It wasn’t due to any sort of nerves, however, it was because he heard someone, or in this case something, fart.

Announcers on the broadcast even made note of the noise, saying that it sounded like a whoopie cushion, but mics at home didn’t pick up the sound. It turns out that it was indeed fart noises that caused Morikawa to step back off the tee and recollect himself before winning The Open by two shots.

Morikawa explained that a fan actually planted some sort of recorder near the and it started playing fart noises as he addressed his ball.

“Some spectator, at some point in the day, snuck a little old school microphone, like a recording. Threw it underneath one of the marshals around there and started playing these farting noises right as I was about to swing,” Morikawa told Barstool’s ‘Pardon My Take’.

“We all knew it was a farting noise. But we seriously thought it was from the spectators. We thought someone was playing it on their phone. The marshals were all looking, we’re looking around, the marshal digs in the grass and pulls this little recorder out. What’re the odds of that happening?”

It’s crazy to think that some fan’s brain told them it would be funny to plant a recorder on the tee box and start playing fart noises, but here we are talking about it.

Morikawa managed to hit the fairway after regrouping himself and made par on the final hole to win what was his second major in just eight major appearances.