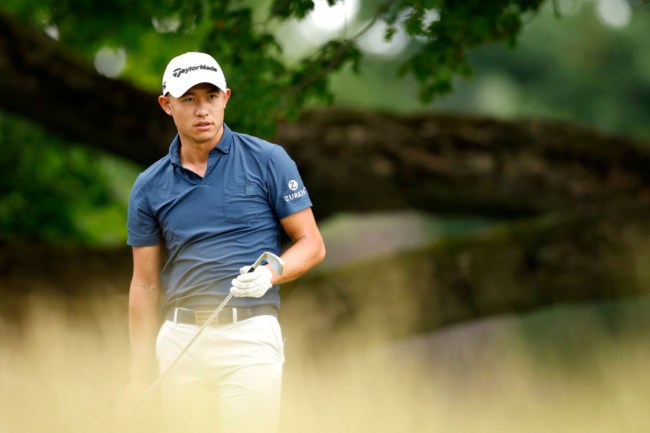 Every golfer is reminded just how incredibly difficult the game is each and every time they tee it up. Just in case you’re one of those golfers who think they’ve ‘recently found something’ or maybe your handicap is as low as it’s ever been, just know that you’re going to be humbled by the game very, very soon.

Let Collin Morikawa’s current situation be a reminder to every golfer on the planet that the golf gods giveth and the golf gods taketh.

Morikawa is a two-time major champion and currently the No. 7 player in the world. He’s known as one of the best ball strikers walking planet Earth, but even he’s been battling the swing demons as of late.

The 25-year-old almost exclusively plays a cut shot, but that patented shot shape has disappeared this year.

“This entire year has been weird,” Morikawa told Golf Channel on Tuesday at the U.S. Open. “I’ve been known for my irons and known to hit cuts. That shot just hasn’t been there.”

Morikawa explained that he’s spent more time on the driving range this year than ever before searching for that consistent cut, but just can’t find it. Instead, he’s been playing ‘golf swing’ instead of golf, something any amateur golfer can relate to.

“I want to be able to just play golf. I think the best players out here, it doesn’t matter if it’s good or bad. They’re able to put the ball in the hole, and I’ve been so worried about trying to hit this cut – like, almost forcing a cut. Why not just play my miss or why not play my shot shape?”

He and his swing coach have been searching, but haven’t been able to “hit the jackpot yet.”

So, in summary, arguably the best ball-striker on the planet even battles his own swing at times.

The funny part of this entire situation is that, statistically, Morikawa has still been one of the better ball-strikers this season. He ranks fifth on Tour in strokes gained: approach, fifth in proximity to the hole, and 33rd in greens in regulation.