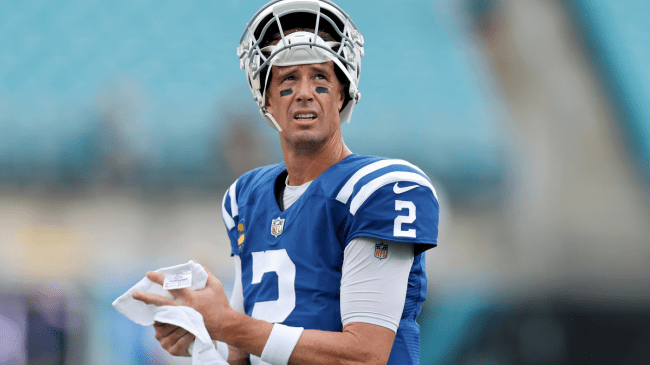 The Indianapolis Colts continue to struggle as they open their 2022 NFL season.

The franchise entered the year with Super Bowl aspirations after adding Matt Ryan under center and getting rid of Carson Wentz, a move they now might be regretting. With Ryan taking over at quarterback, and skill players like Michael Pittman and Jonathan Taylor returning, hopes were high.

They’ve since come crashing back to reality.

Indianapolis played poorly in the opener, ending in a tie with the Texans, 20-20. This, after falling behind 20-3 over the first three quarters. The Colts battled back with 17 fourth quarter points, but they now find themselves in a familiar position in Week 2.

The Jacksonville Jaguars have jumped out to a 17-0 lead behind some fantastic play by quarterback Trevor Lawrence. This is a Jaguars team that’s gone 4-29 over the last two seasons.

The Colts totaled three first downs in the first half while Matt Ryan threw his second interception of the season. That brutal start has social media riled up.

The internet is trolling the Colts after another poor performance

After seeing the team fall behind another cellar dweller in the AFC South, Colts fans are spiraling on social media. Take a look at the immediate Twitter reaction.

Colts when they play the Jags pic.twitter.com/bpyKZUGzvv

NFL insider Ari Meirov said, “The Colts have scored 3 total points in the first half this season. Their opponents: Texans, Jaguars. (They have the Chiefs next week).”

The Colts have scored 3 total points in the first half this season.

(They have the Chiefs next week)

This NFL blogger sarcastically joked, “The Colts are a Super Bowl team with Matt Ryan,” noting how many were feeling ahead of the 2022 season.

“The Colts are a Super Bowl team with Matt Ryan”

Check out a few more Twitter posts on the Colts’ performance below.

The Colts after trading Wentz and getting Matt Ryan pic.twitter.com/Fu7mI9TKvi

The Colts playing in Jacksonville pic.twitter.com/rYOwjeuZCJ

Live look in at the Colts season pic.twitter.com/8oZvtjsmx1

Brutal start for Indy. We’ll see if they can produce another second-half comeback in Jacksonville.