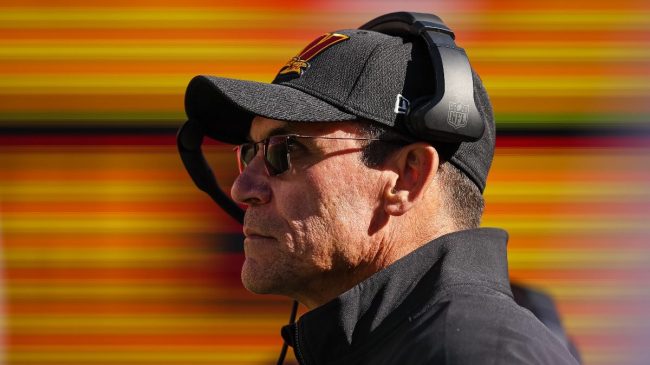 The Washington Commanders have largely struggled so far this season. When asked about it, head coach Ron Rivera surprisingly threw Carson Wentz under the bus. Since then, Rivera has received some criticism for how he handled the question. Now, he finally responds.

Commanders HC Owns Up To His Mistake For Bashing Carson Wentz

According to JP Finlay, the Commanders’ head coach owned up to his mistake. Ron Rivera claims he spoke with Carson Wentz and the rest of the team and didn’t mean to rub anyone the wrong way. The veteran head coach takes the full blame to mend the relationship between himself and his team.

Ron Rivera owns it – “I had a bad day” pic.twitter.com/PZ98qqg4Pi

Shout out to Ron Rivera. It’s not every day we see someone own up to a mistake like that. This is exactly what someone should do when they’re in the wrong. Rivera claims he didn’t mean to say that other teams in the NFC East have better quarterbacks, it’s just that they have more familiarity than the Commanders do.

It seems to be an honest mistake. Washington is moving forward and putting it all behind them. Although Ron Rivera could have caused a wild blunder for the Commanders, he apologized to the team and most importantly, to quarterback Carson Wentz.

Look for this franchise to get back to focusing on football. They have an interesting matchup on Thursday night against the Chicago Bears. This is a real opportunity for the Commanders to finally earn their second win on the season.

If Washington can secure a win on Thursday Night Football, then their season goals remain alive. If not, well, then things could start going from bad to worse.