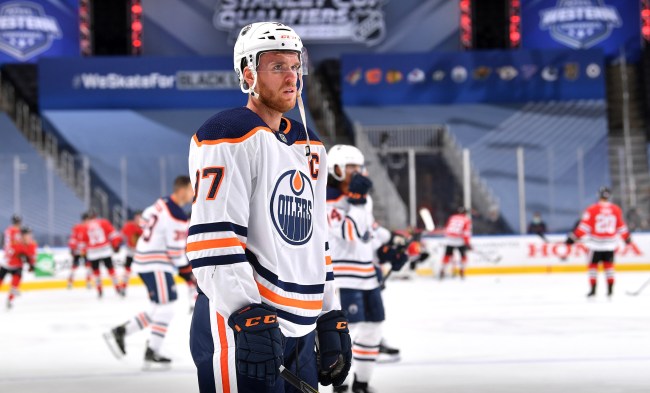 Just like any other young, all-world talent in the NHL, Connor McDavid has been compared to Sidney Crosby throughout his career going all the way back to his OHL days with the Erie Otters and now the two will share a historic milestone together.

McDavid scored his 500th point with an assist during Edmonton’s 3-2 win over Winnipeg on Wednesday night in what was his 369th game in the NHL. How many games did it take Crosby to score his 500th NHL point? You guessed it, 369. Talk about an ironically impressive stat.

“Anytime you can be in the same breath as a guy like that, it’s pretty special. So, yeah, I mean it’s funny how it works out sometimes,” McDavid explained after the game.

"I thought we did a better job of managing the puck & our penalty kill was great. A lot of positives to come out of tonight."

McDavid breaks down the #Oilers victory including comments on notching his 500th @NHL point. pic.twitter.com/6tuj5dZkZb

McDavid was able to notch his 501st career point in the win over the Jets as well with an assist on a power-play goal in the second period.

The 24-year-old became just the 18th player in the NHL to score 500 points in fewer than 400 games. As you’d probably guess, Wayne Gretzky owns the record of the fastest player to reach 500 points as he accomplished the feat in just 234 games.