Conor McGregor Looks Skinny At 155 Pounds, But We’ll Never Forget When He Made 145 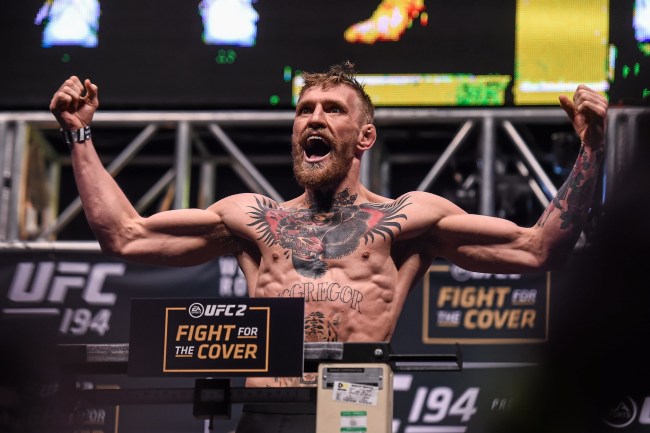 Conor McGregor made weight at 155 for tonight’s fight with Dustin Poirier. Seeing fighters at their weigh-ins is always a little jarring, given that they typically walk around 10-20 pounds heavier and then dehydrate the hell out of their bodies for the weigh-in. I hate to admit this, but whenever I see a fighter step on that scale in his underpants, it makes me incredibly thirsty. My instinct is to immediately take a long, grateful drink of water. Because I can. Because my profession permits me to drink water.

But as skinny as Conor looked for this fight, it doesn’t come close to how he looked for his featherweight bought with Jose Aldo at 145:

Haunting. Seriously, that is terrifying. His cheekbones are practically breaking through the skin of his face. Time for a HUGE sip of water.

Any time we see an example of someone famous losing tons of weight for a fight or a movie role, some moron says “well I could lose 100 pounds in a week if I were getting paid 10 million dollars to do it.”

Uh, no you couldn’t. Sorry, but you’d fold. Isn’t that sad? 10 million dollars on the line and I still don’t think a regular person could go from 175 pounds to 155 pounds in a couple weeks. Even with the power of a massive movie studio behind you, employing personal trainers and nutritionists to ENSURE that you don’t sneak away for a whoopie pie, you’d still find a way to blow it. That’s what separates Conor McGregor and the UFC, as well as Christian Bale and Matthew McConaughey, from normal people. They’re psychotic about this stuff. They’re not riding a Peloton in a sauna cranked to 150 degrees, covered in multiple trash bags, with visions of bags of cash spurring them on. I don’t know exactly what they’re picturing but I know that they see it and I don’t, and that’s perfectly fine. I’ll dutifully power through my 20 minute HIIT ride at room temperature to earn my three margaritas in comfort, thank you very much.