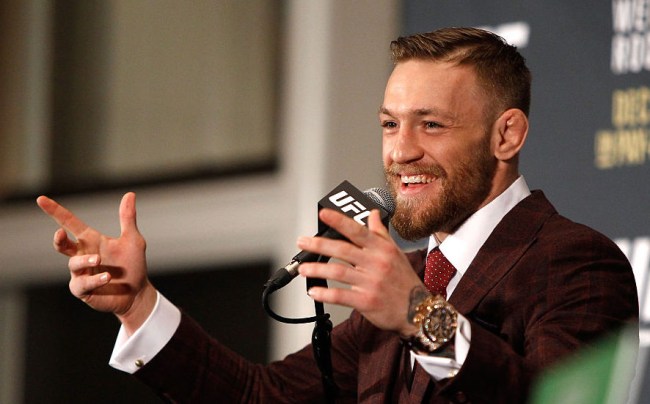 Over the weekend, Justin Bieber apparently listened to at least one too many episodes of The Joe Rogan Experience and Googled “how tall is Tom Cruise” before jumping on Twitter to challenge the actor to a fight that he hoped Dana White might be able to facilitate.

Sure, Bieber might have a couple of inches on Cruise, but unless he’s been washing down steroids with ample amounts of fight milk, that’s practically the only edge he has on the 56-year-old, who likely wasn’t trembling in his boots when he heard the singer had set his sights on him for whatever reason.

In a perfect world, Dana White would have called up Bieber immediately and made it possible for us to watch him get pummeled at the hands of Cruise for our viewing pleasure, but as of this writing, the UFC president hasn’t decided to give the people what they want.

Thankfully, there’s one man who’s doing what he can to give the world the fight it didn’t know it needed: Conor McGregor.

Shortly after Beebs sent out the tweet, McGregor responded with one of his own and said his entertainment company would be more than willing to host the fight if the UFC declined to do so—assuming Cruise is “man enough” to step into the Octagon against the Canadian.

If Tom Cruise is man enough to accept this challenge,
McGregor Sports and Entertainment will host the bout.
Does Cruise have the sprouts to fight, like he does in the movies?
Stay tuned to find out! https://t.co/TxsH9KUyFg

Sure, I’m not holding out any hope that the dream I didn’t know I had until last night will become a reality but that doesn’t mean I’m not allowed to get a little excited about the possibility.