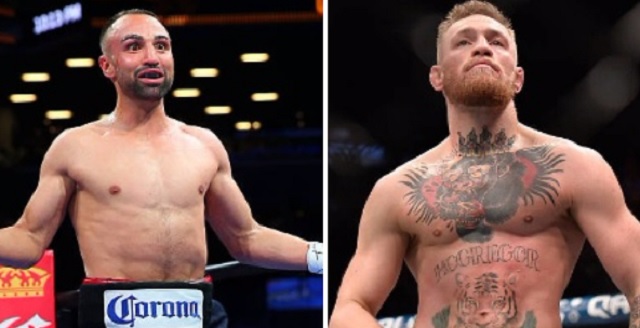 When rumors started to swirl back in December about McGregor’s interest in boxing Floyd Mayweather, former two-weight boxing world champion Paulie Malignaggi was quick to express his disgust. Paulie ripped the Irishman for “disrespecting the sport of boxing” and threatened to “knock McGregor’s beard off.”

After the fight was set in stone, Malignaggi was brought in as a sparring partner to prepare the UFC superstar for the superfight. Although Malignaggi has gone on the record saying McGregor doesn’t have “Oh my God” power” and it’s clear that the UFC’s star’s punches aren’t “what the reputation holds it for,” he has recently changed his tune and lauded McGregor for his “work ethic” and his incessant determination to “upset the odds.”

“Come out of poverty, become a UFC champion, become a two-time two-weight UFC champion,”  Malignaggi said. “Whatever it’s been, he’s done it. He has no reason to ever doubt himself, because he is yet to be proven wrong. From the outside, we’re going to doubt him again, but Conor McGregor doesn’t have any doubts in his mind.”

McGregor recently brought in famed boxing referee Joe Cortez to teach UFC star the rules of boxing ahead of his superfight with his undefeated opponent. Cortez told Rush 93 that a sparring session between McGregor and Malignaggi turned so hostile that the Cortez had to separate the two.

“So I had to call, ‘Time, alright guys you’ve got to stop this right now, I want a good, clean, strong – give me a sportsman-like conduct you understand?’”

Even the most contrarian of sports fans would be hard-pressed to give McGregor a shot in this fight, but I find comfort in knowing that if McGregor loses this fight, it won’t be from lack of effort.