Conor McGregor, The Internet React To The Unveiling Of The New UFC Legacy Championship Belt 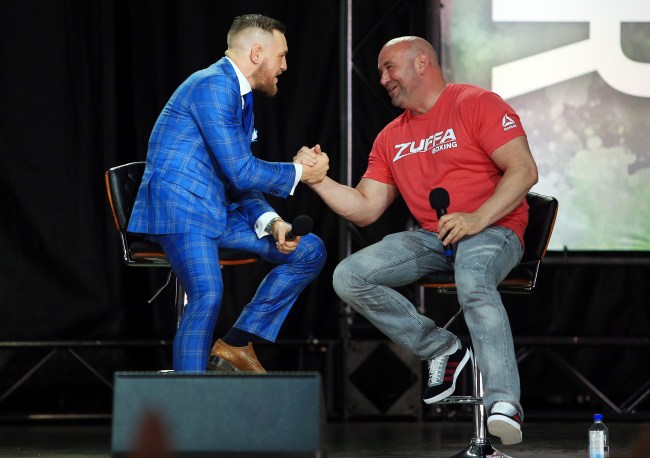 On Friday, UFC President Dana White has unveiled an all-new UFC Legacy Championship Belt that will be up for grabs in the matchup between bantamweight champion TJ Dillashaw and flyweight champion Henry Cejudo this Saturday in Brooklyn, New York.

[Important sidenote: ESPN+ is offering a FREE 7-Day trial. Watch UFC Fight Night Dillashaw Vs. Cejudo, NHL hockey, and every 30 For 30. Sign up here today!] I am a man of the people and I care for your happiness.

The UFC Legacy Championship Belt represents a new era of UFC, ushering in 25 years of the company’s existence. The belt is reportedly valued at three times more than its predecessor, the UFC Classic Championship Belt, which was used for 17 years.

The @ufc's championship belt got an upgrade for the #10YearChallenge 👀 pic.twitter.com/ksYnrRhDej

Check out the new editions to the UFC Legacy Belt 👀 pic.twitter.com/2pSDoMpaiv

Here are some images of the new UFC championship belt that will be unveiled tomorrow night.

The UFC Legacy Championship Belt will be uniquely customized for each individual champion by the athlete’s country, weight class, and number of title defenses and weighs 10.45 lbs. pic.twitter.com/zZmYpGrZs4

“Starting in 2019, fighters who win UFC championship bouts will be awarded a UFC Legacy Championship Belt, which will be used during the duration of their professional MMA career. Subsequent championship wins in their respective division will be represented by red stones on the side plates of the belt. Additionally, athletes who win titles across multiple weight classes will be awarded one belt per division.”

The 25 White Cubic Zirconia and Ruby stones on the belt represent 25 years of the UFC, with the Roman numerals signifying 1993, the UFC’s inaugural year. Each champion’s belt will be customized with his/her name and weight class, and post-victory, one of the stones will be replaced with a red stone. The women’s belt is identical, albeit slightly smaller.

What do you think of the new look? It seems like Twitter has already made up its mind:

Great, if the mission was to make a Superbowl Ring for the UFC… but it wasn't. Then it's like they said no to the ring and put it as a buckle on a belt. Looks bland. Doesn't scream "Bad Mother Fucker". It screams, "Corporate Synergy, Yaaay". #NotImpressed

Is it just me or is this new UFC belt ugly as all heck? pic.twitter.com/QMiEHAO0Gt

the new UFC belt looks like something the Avengers would insert into a space time continuum to go back in time and tell whoever designed this belt to try again. #UFCBrooklyn pic.twitter.com/J5PvyZY9yT

Why does the new UFC belt look like a Power Rangers morpher tho? pic.twitter.com/TTi4uZ21sP

New UFC belt reminds me of the Impact Grand Championship but not as sleek. pic.twitter.com/DakmFI1qTH

I just saw the new UFC belt designs. What in the blue hell? Nah, please tell me this is a joke. Even Stevie Wonder could have designed a better belt than this. This is disgusting, a crime against humanity. Whoever designed this belt needs to be imprisoned. Yuck! 🤢 pic.twitter.com/kx8o6Kfo1W

I do not like the new UFC belt at all

This is literally the worst belt, boxing, kickboxing, MMA, pro wrestling, you name it, that I’ve ever seen. What are you guys thinking?

But why though??? The current belt is PERFECT!!! pic.twitter.com/YRMVBnqXA0

With all the hate, only one opinion can trump them all.

I went from hating it to loving it. I am a man of little integrity.