Conor McGregor Hit The Club, Shouted Out Both Rita Ora AND His Fiancée Amid ‘Date Night’ Drama 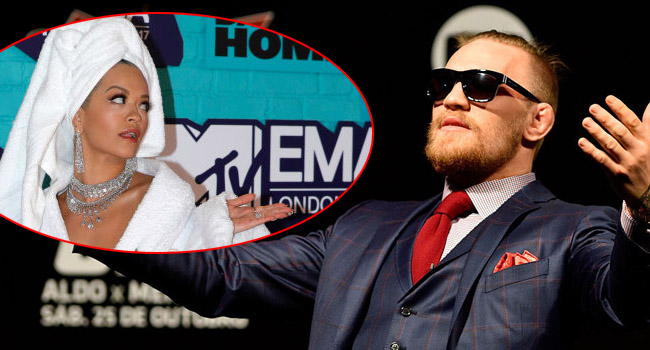 In case you were wondering, yes, Conor McGregor is very well aware of all of the “date night” drama he and Rita Ora caused. And as is pretty much always the case with McGregor, he doesn’t really appear to give a f*ck.

But first, just to get you caught up, in case you missed it, here’s what all the drama is about…

“Date night,” Ora captioned the photos of her and McGregor at the British Fashion Awards below…

Ora also tweeted this next photo with, “Last night with my real date,” which, of course, went pretty much ignored.

Which led to a plethora of tweets like this…

Does Rita Ora not know that Conor McGregor has a girlfriend who’s the mother of his son? And does Conor not realize what he’s doing too? Talk about home-wrecking!

My god, just how many people is McGregor cheating on his fiancée with?!

So, just one day after half the internet lost their damn minds because Ora and McGregor were sitting close to each other in some photos they took, McGregor hit up Cirque le Soir in London and addressed the situation as only he can. By grabbing the mic and shouting out both her, and his fiancée Dee Devlin.

Uh oh, he mentioned his fiancée second and didn’t make the heart gesture that he did when he shouted out Ora! (You know he’s just trolling you all, right?)

That look of purely not givin a f**k 😜 what’s goooooooood??? 😘 pic.twitter.com/6rYCXhVIhX