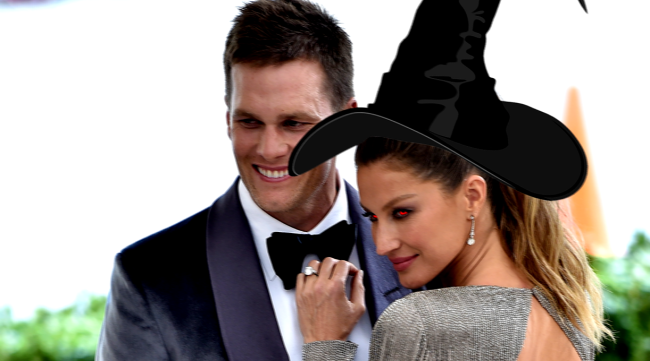 In the wake of all the strange news surrounding their marriage possibly falling apart, a crazy conspiracy theory about Gisele Bundchen and Tom Brady has gone viral.

Bear with me on all of us.

The witches of TikTok, AKA WitchTok, believe they have sorted out several of the mysteries surrounding Tom Brady and Gisele Bundchen, and it’s not limited to just their recent marriage troubles.

Their theory also explains things like Tom Brady having perhaps the best year of his Hall of Fame career last year at the age of 44.

In addition to that, it also gives us the reason why Tom Brady looked so different when he returned from his mysterious 11 day training camp absence.

It also explains why after years of remaining seemingly immune to injury, Brady is now appearing to break down after just four games this season.

And it all has to do with the fact that Gisele Bundchen is a white witch who feels that she has been wronged by her husband.

Now this isn’t just one person on TikTok that’s saying this. There are literally hundreds of witches on TikTok who are making this and similar claims.

Gisele has cast protective wards to shield Tom’s body, spells to enhance his athletic abilities, and given him potions that have allowed him to freeze time and stop the aging process. The agreement between Brady and his witch wife was that she’d support his athletic endeavors, and in exchange he’d retire at age 45, the tarot number for making “positive life changes,” meaning leaving football to spend time with his family. Brady broke this promise with Gisele when he announced he was returning to the NFL after a 40 day retirement — that number is important too, because 40 is the number for following life’s purpose, or the soul’s desire.

So, not only did Tom choose not to retire at age 45, as they agreed, but he hurt Gisele by returning to the NFL after 40 days — showing his soul belonged to the NFL and football, not his wife and family.

Don’t believe him? Try telling that to the witches…

Related: Gisele Bundchen Rumored To Be Angry With Tom Brady Over What New Report Calls A ‘Sexless Marriage’

As recently as 2019, Tom Brady all but admitted his wife Gisele Bundchen is a witch

“I’ve learned a lot from my wife over the years,” he said. “She’s so about the power of intention, and believing things that are really going to happen and she always makes a little altar for me at the game, because she just wills it so much. So she put together a little altar for me that I could bring with pictures of my kids. I have these little special stones and healing stones and protection stones and she has me wear a necklace and take these drops she makes and say all these mantras.”

On Thursday, Page Six also published photos of Gisele and a woman she hired to sage her car before going inside an office with Bundchen.

I learned while hanging with witches in Sedona and Southern California that you "sage" a space to cleanse it of evil or harmful, for lack of a better word, spirits. Tom Brady must have left a whopper of negative energy around Gisele Bündchen https://t.co/s4mYdaMuRp

I don’t know about you, but I’m convinced. Just watch…