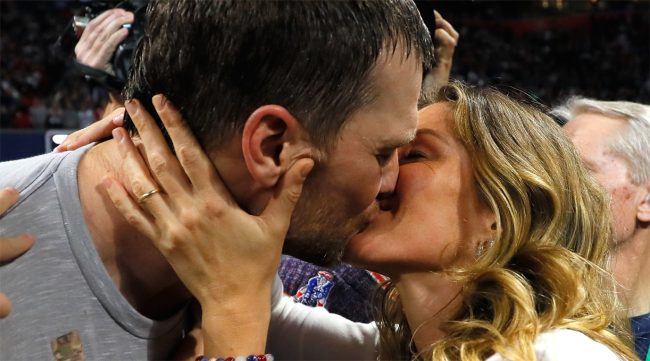 The news surrounding the supposedly failing marriage between Tom Brady and Gisele Bundchen has been coming out at a furious pace over the past couple of weeks.

“That marriage has gone cold as ice,” said an insider close to the quarterback. “Gisele is a Brazilian supermodel with a super sex drive and she’s told her friends she needs more from her all-American husband.”

A source also disclosed, “She fears he’s fallen out of love with her. She told friends she can’t live without it anymore!”

Insiders say Tom’s prolonged absences for NFL obligations and his lack of scoring in the bedroom have left the marriage in the end zone. Sources claim Gisele felt betrayed when Tom’s February retirement from football lasted only 40 days before he committed to the Bucs for another year after he promised to quit and focus on his family and marriage.

The couple had a string of brutal blowups and the livid Victoria’s Secret bombshell gathered up the kids and swept them off to Costa Rica without Tom. Insiders say Gisele believes Tom blatantly lied to her about his intentions to give up the game and be a better hubby and father.

Gisele Bundchen is rumored to be angry with Tom Brady over several things, including a lack of intimacy

Meanwhile, another report published on Thursday by TMZ claims “Gisele has separated from Tom and threatened to divorce him several times over a period of years … and it was all over football.”

Our sources say the sticking point for years has been that Gisele wanted Tom to get out of the game … and although she’s publicly talked about her fear he would develop CTE, she’s been very upset with his NFL schedule … which takes him around the country for 6 months out of the year. We’re told she simply hates it.

We’re told Gisele has threatened divorce in the past — each time over football — but they were able to work things out. This time, however, we’re told it’s different.

A leading divorce attorney also revealed on Thursday that Tom Brady could lose $200 million in a divorce, should the relationship officially come to an end.

If that should happen, several betting sites are already offering odds on who Gisele Bundchen’s next boyfriend will be. Among the names listed near the top are Pete Davidson, Bradley Cooper, Brad Pitt, Leonardo DiCaprio, Jason Momoa, Michael B. Jordan, Aaron Rodgers, Zach Wilson, and Drake.