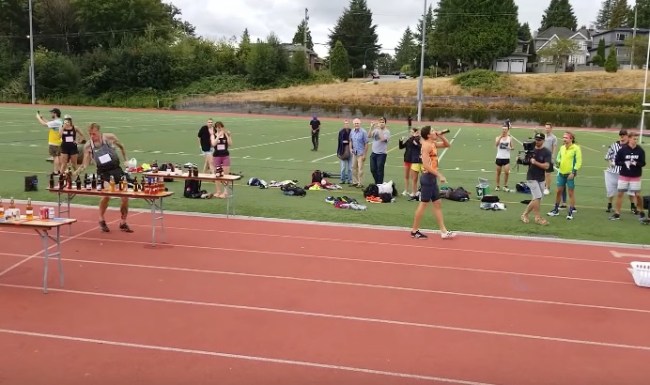 Corey Bellemore is in a league of his own when it comes to the Beer Mile. The dude is running a faster mile *while chugging* beers than most people run in their entire lives without trying to multitask.

Bellemore is a former National Champion runner from Canada, and he’s the current/previous world record holder in the Beer Mile. He just smashed his own record by an astounding 9 seconds and set a new world record only to find out that he’d been disqualified for something I’ve been guilty of many times throughout the years.

If you aren’t familiar with the Beer Mile format it goes like this: each runner must complete a mile on the track and they must drink one beer each lap. That’s 4 beers in 4 laps on a 400-meter track.

Runners aren’t allowed to vomit. The beer must be 5.0 ABV or higher. It must be chugged from a bottle or a can. No special drinking receptacles are allowed to help the runners chug easier and faster (like a beer bong). And unconsumed beer left in the can or bottle must measure less than 5 ounces.

When I say in the headline that he did ‘Something We’ve All Been Guilty Of’ I’m referring ot leaving a few suds at the bottom of the beer. I’ve certainly woken up the morning after a party to clean up and found beer cans with beer left in the bottom and I know htat you have too.

Corey Bellemore’s previous Beer Mile world record for the Beer Mile was set last year when he completed the 4 beers and 4 laps in a lightning-fast 4:33.6. Here’s Corey’s world record run from last year (this year’s record is below):

This year, Corey beat his own world record by 9 seconds and finished the 2018 Beer Mile World Classic with a time of 4:24.4 (video below). The fastest Beer Mile ever ran. But then he was informed that he’d been disqualified because one of his beers had 4.5oz left in it which is 0.5oz more than the allowable 4oz according to the Beer Mile rules.

It’s only been five years since the first sub-5 minute Beer Mile was run. It’s amazing that in just five years the sport has shaved off over 30 seconds from that record, and we’ve got Corey Bellemore to thank for that.

After being disqualified, Great Britain’s Dale Clutterbuck won the title with a Beer Mile time of 4:50.7. Also, it’s worth noting that a few of the other top-10 finishers were disqualified for leaving more than 4oz of beer in their cans according to Sports Illustrated.

By the way, this article about a ‘Completely Jacked Statue of Jesus‘ has just gone viral again and I’m guessing that most of you bros reading this article about the Beer Mile Record will also be interested in that. So, if you’re curious as to what the world’s most shredded Jesus statue looks like then follow that link.