Salty, Unruly Cowboys Fans Throw Trash At Referees And Their Own Players Over Loss To 49ers 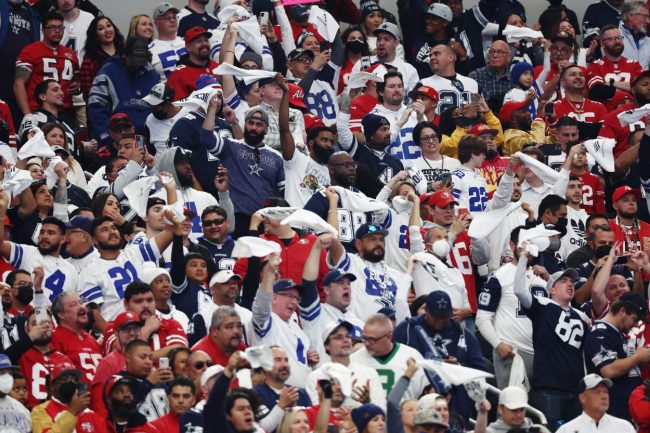 After falling behind 23-7 at the end of the third quarter, they scored 10 unanswered points in the fourth quarter to make it a six-point game in the closing moments. The Cowboys got the ball back with 32 seconds left in the fourth quarter and started to drive toward the end zone with a chance to win.

However, with no timeouts, they could not stop the clock. As a result, Dak Prescott and his offense needed to stop the clock following a 17-yard gain over the middle.

Dallas rushed to the ball and tried to snap it, but a referee was in the way, crashed into the center, and caused the clock to run out before Prescott could get the ball and spike it. The game came to an end, the Cowboys lost, and the 49ers will advance to the NFC Divisional Round.

This guy isn't happy with that last play call 💀

According to Tony Romo, who was on the call for CBS, it was Prescott’s fault that they could not get the play off, not the official’s fault. Either way, the sold-out crowd at AT&T Stadium took umbrage with the referee who was in the way.

Who knows if the Cowboys would have scored on a last-second Hail Mary, but the fans believed that it was the referee’s fault that they did not get the chance to try. Even though they were wrong.

In turn, they took their frustration out on both the referees and their own team.

As the players and officiating crew ran off of the field, the unruly, very salty Dallas faithful proceeded to throw trash and projectiles onto the field. It looked like it was timed toward the referees, but their own players caught caught in the crossfire of the debris.

#Cowboys fans throwing things at their own players. Got this sent to me by one. Be better fans wow! pic.twitter.com/mlVttbFlpg