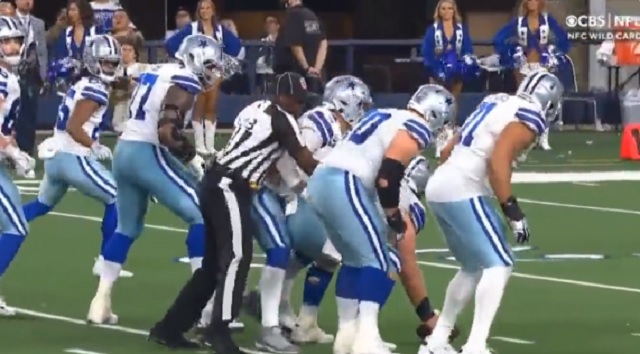 The Cowboys-Niners game ended in controversial fashion, but Tony Romo believes Dak Prescott is at fault for not knowing the rules on the final play.

Down six points with thirteen seconds left to go in the game and zero timeouts, Prescott decided to run upfield before sliding. Prescott then handed the ball to his center which appears to be where he made his mistake.

Here's how the #49ers–#Cowboys game ended: Per NFL rules, Dak can't spot the ball on his own and snap it. Ball must be spotted by the ref. By the time that happened, clock reached triple zeroes. pic.twitter.com/NY9H7IHmsD

Many people blamed the official for not setting the ball in time, but Romo pointed out that Prescott should have handed the ball to the ref instead of his center on that final play.

You can’t set your own ball as a center, you have to give it to the ref. Dak Prescott should have looked and found the ref. You Can’t give it to your center.

Tony Romo explaining why it was Dak’s fault for not giving the ref the ball on final play pic.twitter.com/HTqhAjfGnw