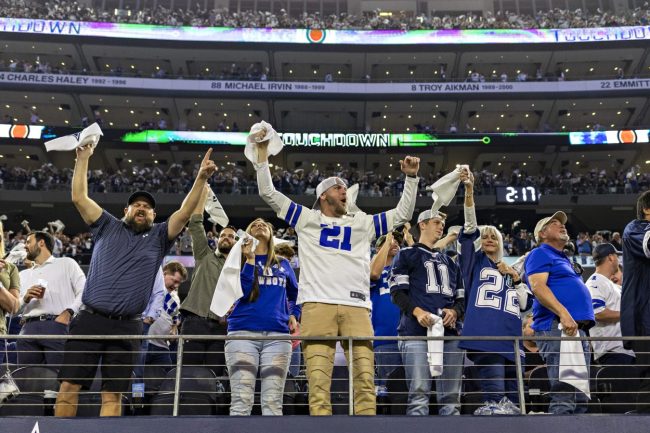 Sunday’s Wild Card was an L for the Cowboys and their fans. Dallas hosted a Wild Card game, fell behind early, tried to mount a comeback, but lost in the closing seconds in embarrassing fashion.

It was a very unsuccessful day for all those in attendance, except for this group of fans who allegedly managed to sneak into an experience of a lifetime.

According to a video posted by ‘@finessefave’ on Instagram, he and his friends made their way from the nosebleeds of AT&T Stadium, onto the field, and into the postgame media session. It is unclear exactly how they got into the game, where they were seated originally or how they pulled it off, but it looks legit.

In the video, the group begins outside of the stadium. From there, they cut to seats on the third level of the upper deck.

After somehow making their way down onto the field, they found themselves right on the sideline next to the 49ers bench. And then things get really crazy.

According to the video, the group found some official NFL media vests. As a result, they were able to walk back into the tunnel and into the players’ parking garage. Security did not appear to bat an eye at the group in their vests.

When the game was over, the group made their way into the media room.

Once situated in the media room, the group even took part in the postgame press conference. As Dak Prescott took the podium after the loss, the group asked Dallas’ quarterback two questions about the game.

Here are the questions the fan allegedly asked at #Dak's postgame presser after the loss to the #49ers.

Here is the video of the fake media finessers asking their questions:

Now, it is unclear as to the truth behind these videos, but it seems legit. Based on their videos alone, it does not appear to be a sham.

However, there are questions that are left unanswered. Where did they get the media vests and how did nobody see them? How did they make it onto the field without having someone stop them if they didn’t have the correct passes?

Once the media vests are on, it’s smooth sailing. But everything up to that point could raise some eyebrows.

Either way, Cowboys security must be having a conniption. Or they don’t care. Probably the latter because they lost and the season is over.