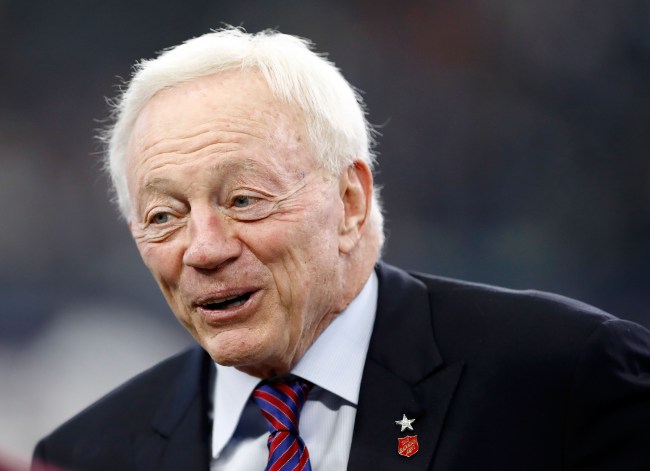 Dallas Cowboys owner Jerry Jones is not only a savvy businessman but he’s also one of the most colorful characters in the history of the NFL.

Throughout the years, Jones has given us some absolutely bizarre quotes that have left many shaking their heads in confusion.

For example, back in 2016 Jones randomly busted out the phrase “circumcising the mosquito” while speaking to the media about Tony Romo’s back injury.

We don’t have a situation on the 53, this isn’t an active roster day-game situation. He won’t be active, and we don’t have anybody valuable enough to take up that last spot to give us the opportunity to see how he does. There’s just not enough value there realistically to bring someone else in. That’s the deciding factor.

“You don’t have to spend a lot of time going over and kind of circumcising the mosquito. You don’t have to do that over there on him because you look back over on the other side that caused you to make the decision, and there’s nobody good enough to take that spot to give you a chance for that if he can come back.”

Apparently, NFL owners are not sure what Jones is talking about half the time either. On Tuesday, ESPN released an exposé about Demaurice Smith’s time as NFLPA President that featured the Cowboys owner telling a bizarre story about “owls fucking the chickens” on his father’s farm after the players’ union dropped the ball during the 2011 lockout.

However, in the view of most owners, the league was still handing the players too large a slice of the pie. “It was a very generous deal, which the owners didn’t love,” The player representatives rejected it out of hand, with Smith in agreement, ensuring a lockout. “De wanted a percentage of the real pie, not a bigger percentage after the owners ate all they could,” a union official says.

Shortly afterward, owners went upstairs to join a group of team and league executives, who asked what had just happened. It would turn out the deal that the union turned down would have been roughly $1 billion better for the players than the deal they would cut months later, sources say.

Jerry Jones of the Dallas Cowboys took the floor: “Look, my daddy grew up on a farm in southwest Missouri. Every so often in the spring, the wind would come from a different part of the country, and the moon would set a different way, and the owls would start f—-ing the chickens.”

Nobody knew where he was going with this story.

“The owls are f—ing the chickens,” Jones continued. “It makes no sense that they turned this down, but it’s a great thing for us.”

The Internet wasn’t sure what to make of Jones’ story about the owls and chickens hooking up on his dad’s farm.

I grew up on a chicken farm and I never once saw owls make nasty with the chickens.

On a day where the Cowboys could get a deal done with their QB, the big news is Jerry Jones talking about Owls having intercourse with chickens for absolutely no reason at all. Nice https://t.co/2ezf2jKp5c

Can @RonMagill elaborate on what the hell is happening with Jerry Jones chickens and owls? https://t.co/4poAuf8e0q

"I grew up on a farm. I have seen animals having sex in every position imaginable. Goat on chicken. Chicken on goat. Couple of chickens doing a goat. Couple of pigs watching. Whoever drew this got it exactly right."

The farm town where I grew up was apparently quite different from Jerry Jones's https://t.co/j0gEIvXIPS