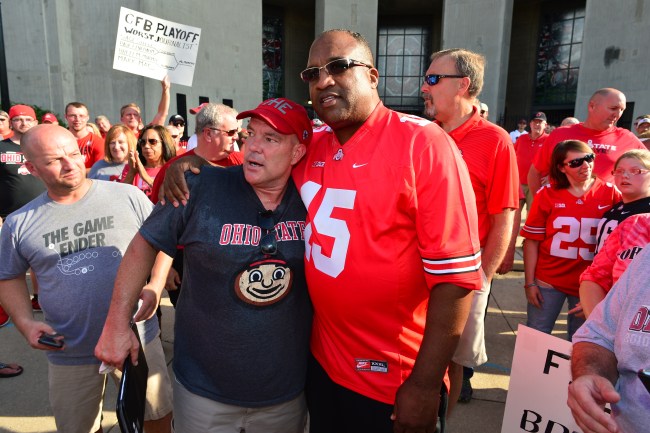 Stacy El-Muhammad, the father of Dallas Cowboys running back Ezekiel Elliott, is facing several charges for improperly keeping a serval, an exotic cat native to Africa.

Dallas Cowboys running back Ezekiel Elliott’s dad was hit with 21 charges Tuesday for the alleged illegal purchase of an African wild cat that attacked a neighbor’s dog in Ohio two months ago, a report said.

Back in October El-Muhammad made news when his serval was killed by police after it attacked a neighbor’s dog.

Serval Update. Investigators from Ohio Dept of Ag are executing a search warrant at the home of Stacy Elliott – father of former OSU running back Ezekiel Elliott. The Fairfield County property is adjacent to the neighborhood where a Serval cat was shot by a deputy Sunday. pic.twitter.com/RGhsK0P6Ew

Jim Zuber says he and a neighbor first saw the serval Saturday.

“It just creeped along between my bushes and the house here and it literally came up to the front door,” Zuber said. “So we cautiously stayed out in the front yard as it went around the side of the house.”

Zuber said the serval had a collar on but clearly exhibited wild instincts.

“It was kind of creeping towards us and as we took a step backward, it would take steps toward us and when we made noise to shush it away, it hunched back in a position to leap forward,” he said.

The serval resurfaced in this neighborhood Sunday when it allegedly attacked a dog. Deputies responded and shot the cat when it appeared in an “attack stance.”

Elliott’s father initially claimed that the serval was not his but police determined that he did indeed own the cat.

The Ohio Department of Agriculture filed nine charges against El-Muhammad:

‒ Failure to have dangerous wild animal signage on cage.

Eight of the nine charges are first-degree misdemeanors. El-Muhammad also faces 12 other charges from other involved agencies.