Cris Collinsworth Spills The Beans On His Iconic Slide Disappearing 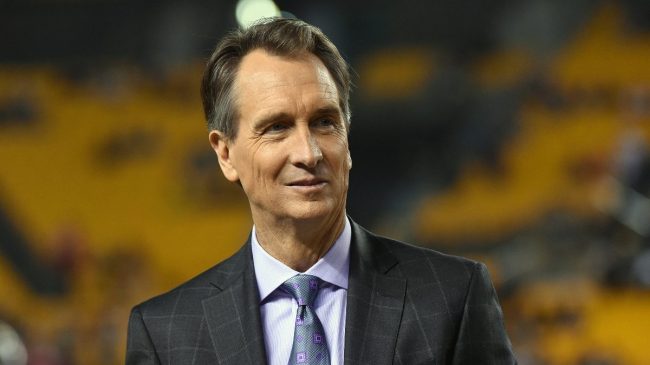 Sunday Night Football made some changes after Al Michaels took the Thursday Night Football slot with Amazon Prime. Mike Tirico fills in, who is a fantastic replacement in his own right. However, something has been off since Week 1, as the iconic Cris Collinsworth slide is noticeably missing.

During an appearance on Up & Adams with Kay Adams, Cris Collinsworth details how the slide came to fruition. It’s a nice inside look at the filming process of Sunday Night Football. Then, Collinsworth explains why everything changed once Mike Tirico joined the broadcast.

Here’s a guy who gave us alllllll the details on what happened to the iconic Collinsworth Slide.⁰⁰@heykayadams | @CollinsworthPFF pic.twitter.com/XQbD4UQwEG

Mystery solved. Turns out Al Michaels was the key ingredient for Cris Collinsworth to perform the iconic slide everyone loves and adores. No wonder it felt like Sunday Night Football was missing something. Maybe Collinsworth will create a new intro for the upcoming NFL games.

At the end of the day, we’re just glad football is back. Cris Collinsworth and Mike. Tirico has been rather solid for the most part. Outside of that weird scratchy voice, Collinsworth was dealing with, the product has been largely the same.

But please, for everything that is holy, bring back the slide intro! We need it back in our lives as soon as possible! If not that, then do something else in the introduction.