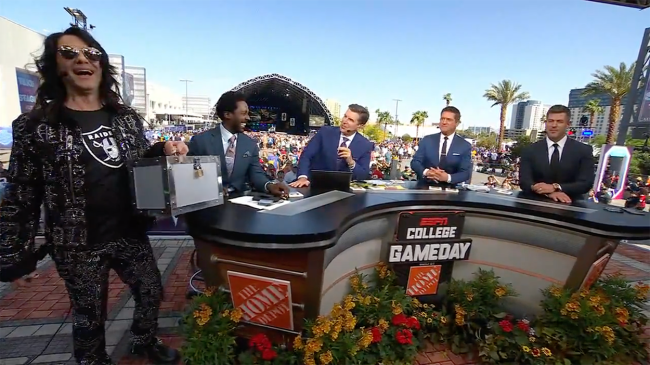 The NFL Draft in Las Vegas wouldn’t be Las Vegas without Criss Angel.

The man they call Mindfreak was not only in attendance on Thursday night, but he pulled off a mind-blowing magic trick. He, somehow, correctly predicted the first three picks in the draft despite no one knowing who would go when.

Angel joined ESPN’s College GameDay crew prior to the start of the draft. He hung a locked box next to the set, in which he claimed to have the first three draft picks written out on a piece of paper.

If he gets them right, he's coming for @MelKiperESPN's job 😅 pic.twitter.com/LwfNDw61yb

After suspending the box above the ground, Angel walked away and left it alone for more than an hour prior to the draft and through the first three picks.

Nobody touched it. Not the GameDay desk, not Angel— nobody.

To some extent, Angel had 50/50 chance of getting the first two picks correct. It was either going to be Walker and then Hutchinson or Hutchinson and then Walker.

The No. 3 overall pick, however, was a shock. LSU cornerback Derek Stingley was drafted by the Houston Texans, which surprised most NFL analysts, scouts, and fans alike.

There was a lot of buzz around Stingley over the last few weeks and his stock rose significantly, but it was nearly impossible for Angel to know it would be him, right?

As the New York Giants decided on who to take at No. 9, Angel returned to the GameDay desk, unlocked the box and unrolled his picks. He got it right.

As ESPN said, Desmond Howard’s expression says it all. Criss Angel is magic and there is simply no other explanation.