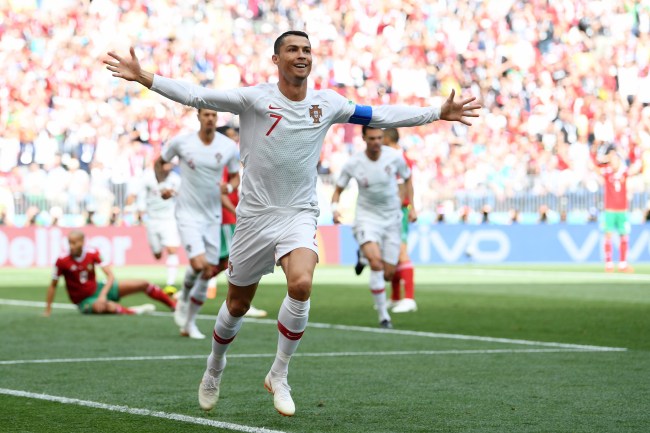 When Cristiano Ronaldo wakes up in the morning and gets dressed, he puts his pants on one leg a time just like the rest of us. The difference is he then goes on to piss greatness and perfection everywhere he goes. He holds the record for the most Ballon d’Or awards (5), most career goals scored in Europe’s top six leagues (394), only player who has scored in 8 consecutive major international tournaments, most goals in UEFA competitions (152), most Champions League goals (120), and the most international goals scored by a European player (85 goals). When it’s all said and done, there might not be a single goal-scoring record that he doesn’t own.

Sure, you can look at Cristiano Ronaldo and think ‘that is one gifted athlete’ but he’s also tirelessly worked his ass off for his entire life to get to the top. He’s driven by a competitive spirit that some have likened to Michael Jordan, one of the most notoriously competitive people in history. This story about Cristiano Ronaldo was relayed by his former Manchester United teammate, Patrice Evra, and it shows just how other-worldly Ronaldo’s competitive spirit is. He simply cannot lose, suffer loses, and be a loser. That’s not in his DNA:

Evra remembers how Ronaldo was once so unhappy at being beaten by Rio Ferdinand at table tennis that the five-time Ballon d’Or winner got his cousin to buy him a table for training purposes – just so he could get his own back.

“They were playing table tennis and Rio beat him. We were all screaming and Ronaldo was so upset,” Evra told ITV Sport’s World Cup podcast.
“He trained for two weeks at home, came back and he beat Rio in front of everyone – that’s Cristiano Ronaldo.
“That’s why I’m not surprised today that he wants to win another Golden Ball, why he wants to win the World Cup – because he’s an angry man.” (via fourfourtwo)

The dude lost at a game of ping-pong in front of his friends, they laughed. And it fired him up so much that he trained with every second of his free time for the next two weeks and came back to embarrass his teammate in a crushing victory in front of a crowd. Not only could he not take losing but he needed to win in front of everyone to secure that redemption.

How does this at all relate to Cristiano Ronaldo’s career as a soccer player? Well, he currently leads all goal-scorers in the FIFA World Cup with 4, including a hat-trick against Spain in Portugal’s opener and the lone/winning goal today against Morocco which came in the 5th minute of the match. He’s never won a World Cup and right now he seems like a man on a mission.

I guess by now you’ve figured out that I’m a Ronaldo fan when it comes to the great Ronaldo-Messi argument….This is another great Cristiano Ronaldo story by the way: