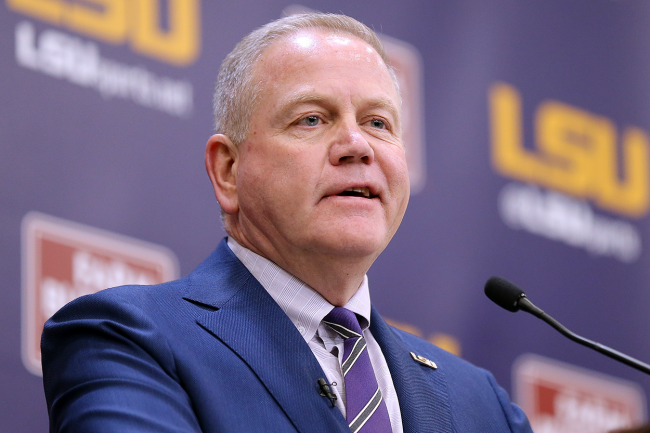 The University of Miami’s new head football coach Mario Cristobal is a bilingual second-generation Cuban-American from Miami. Thus, when he was asked a question in Spanish during his introductory press conference on Monday, it made perfect sense that he responded in Spanish.

Cristobal speaks Spanish, and therefore, knew how to respond. He also used a perfect accent with proper articulation and intonation.

That all makes sense, right? Right. Here is the clip:

However, less than a week prior, another new hire broke out an accent that did not make any sense.

Brian Kelly, who was raised in an Irish-Catholic American household in Everett, Massachusetts, went to college in Worcester (one of the most Massachusetts places in Massachusetts), coached in Michigan and Cincinnati, and spent the last 11 years in South Bend, Indiana. If he were to have an accent, it would be that of someone from the New England, with a slight hint of midwest.

It would NOT be anything even remotely southern sounding. And yet, during his introductory press conference after being hired at LSU, Kelly broke out a bizarre fake southern accent. The false demeanor set the internet ablaze and everybody piled on Kelly for the lunacy.

Now, five days later, after Cristobal broke out perfect Spanish because he knows Spanish and is a Cuban-American from Miami, college football fans are back to joking about Kelly’s hilarious accent.

If Cristobal is speaking Spanish, what is next— will Kelly start speaking French now that he is in Creole/Cajun country?!

I'd be happy to give Brian Kelly French lessons https://t.co/Y9Z3W0CoFr

What do we want to see more: Brian Kelly eating legit Cajun food or Brian Kelly trying to speak French?

Brian Kelly signing up for @rosettastone and @duolingo ASAP.

If Brian Kelly does not come back next week wearing camouflage overalls and speaking French, I will be thoroughly disappointed.