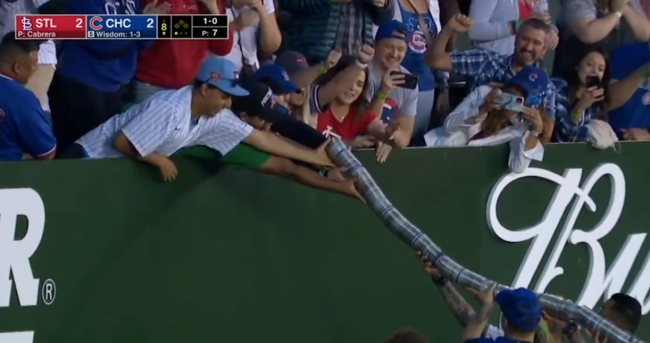 The weekend series between long-time rivals, the St. Louis Cardinals and the Chicago Cubs, turned out to be even more entertaining than baseball fans would normally expect.

Not because of what happened on the field, each team ended up winning two games in the four game set, but because of the stick-to-it-iveness exhibited by many of the Cubs (and some Cardinals) faithful off of the field.

Last week, during the first game of the series at Wrigley Field, a bunch of fans banded together to create a fantastic beer cup pyramid. It consisted of approximately 70 beer cups and reached a very impressive nine levels high.

It was awesome, or well, it was until a buzzkill usher decided that everyone was having way too much fun and walked over and knocked it down, thus earning himself the wrath of the internet.

Cubs: so our team isn't gonna win
Come to the game and spend $100s on beer
Fans: okay can we have fun?
Cubs: no, you will sit there and throw away each cup after use. NO STACKING OF ANY KIND!
Fans: but.... why?
Cubs: idk, just cause https://t.co/Ch4rbKNHMM

Fast forward to game four of the Cubs vs. Cardinals series and the fans in the stands were back at it, only this time they took things up a notch.

Fans at the Cubs vs. Cardinals game went next level with a beer cup snake

In the fine tradition that was first documented at Wrigley Field in 1969, numerous fans, oblivious to the fact that the Cubs and Cardinals were tied at 2 in the bottom of the eighth inning, put the capper on a rarely-seen, but always appreciated multi-deck beer cup snake.

Marvel at its majesty…

Sadly, many baseball “purists” were butt-hurt by the fans not paying close enough attention to the tie game versus the Cubs’ hated rivals.

It’s a tie game in the 8th… against your rival…

It’s ok when it’s a blowout. It’s an embarrassment during a game like this.

They were quickly drowned out, however, by numerous other fans that thought it was tremendous and that the late, great Harry Caray would have loved it.

Harry would be proud pic.twitter.com/RKBqkF8tsE

I want cup snakes to be allowed *and* I want everyone to stop doing it.