Dabo Swinney ‘Disappointed’ To Learn Of Deshaun Watson Allegations, Says He ‘Loves Him Like A Son’ 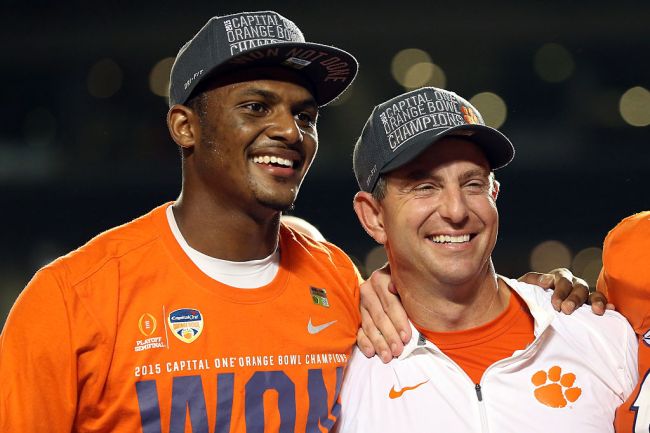 Dabo Swinney, who coached Deshaun Watson for three seasons at Clemson, has commented on the ongoing sexual assault allegations involving his former quarterback. Watson has been accused by 24 different women and 14 civil lawsuits have been filed against him as of March 23.

Swinney explained that he wouldn’t be speculating on legal matters, but did say that he is “disappointed” in seeing Watson’s name in the news like this and reiterated that he still loves him like a son.

“We are disappointed to see his name in the news and all that is going on,” Swinney told TMZ. “Look, I love Deshaun Watson. He is like a son to me. That is how I love him. As far as all the legal stuff and all of that, that will all take its course and all of that stuff. We certainly can’t speculate or comment on any of that stuff.”

The Clemson head coach also looked back on their long relationship, which dates back to when Watson was a freshman in high school.

“But all I can tell you is that I have known Deshaun since he was in the ninth grade. And that he has been nothing but exemplary in every area that I have ever known him in,” Swinney explained. “Three years here, as a player, I think I had a chance to yell at him one time because he was five minutes late to a team meeting that he overslept for. And that is it. That is the Deshaun I know. I can only base my thought on my experiences with him, which have been wonderful. Again, I love him like a son, and we will just have to see where everything else goes from there.”

In one of the lawsuits, a masseuse claims Watson tried to grope her vagina, pushed her buttocks to his face, and touched her hands with his penis. At the end of the session, Watson only paid her $100 of the $300 they had agreed upon because she apparently “had not given him what he wanted.”

Following the most recent lawsuit filings against Watson, his lawyer Rusty Hardin called them ‘meritless allegations.’ “I’m extremely proud to represent Deshaun Watson and wholly stand behind him against what we believe are meritless allegations. We will respond and ask you to keep an open mind until we do so,” Hardin said.