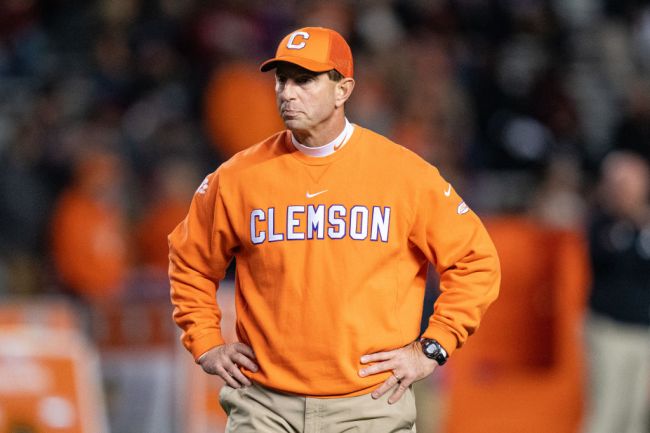 Dabo Swinney has always been very outspoken about whatever issues he sees in college football. Recently, he has had a lot to say about NIL and the transfer portal.

Today, Swinney talked to ESPN’s Chris Low and he had a very surprising vision of what the future of college football looks like.

My sitdown with ⁦@ClemsonFB⁩’s Dabo Swinney, who isn’t shy when it comes to speaking his mind on just about anything. https://t.co/bYxitl5ypu

“I think there’s going to be a complete blowup … especially in football, and there needs to be. I think eventually there will be some type of break and another division. Right now, you got everybody in one group, and it’s not feasible. Alabama has different problems than Middle Tennessee, but we’re trying to make them all the same and it’s just not. I think you’ll have 40 or 50 teams and a commissioner and here are the rules.”

I don’t understand how anybody could actually think this is a good idea, especially the head coach of one of the top programs in college football. Maybe Swinney’s just worried people will figure out that Clemson going undefeated in the ACC isn’t much more impressive than doing it in the AAC.

Whatever Swinney’s reasoning, it’s a really terrible idea. Teams from other conferences have proven in recent years that they can hang with the Power 5. It also raises questions like who would be in this group of 40 or 50 schools?

Would Rutgers and Kansas get spots over Boise State and BYU just because they’re currently in Power 5 conferences?

Whatever the actual layout of college football’s future will be, Dabbo Swinney’s vision for it just seems like a problem for the sport.