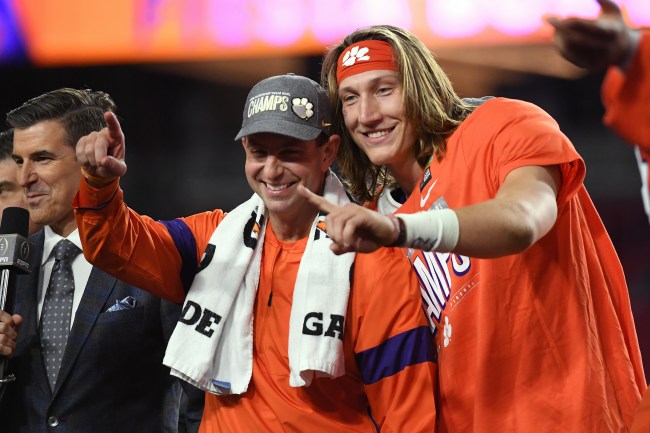 Clemson Tigers head football coach Dabo Swinney may be the highest-paid coach in college football in terms of overall value — earning an annual average salary of $9.3 million after signing a wild extension last year — but that doesn’t mean he may not be open to at least listening to other opportunities should the come about. In fact, if the NFL does come calling at some point, the always energetic Dabo may find that now’s the time to challenge himself and move from the college to the pro ranks; especially with stud quarterback Trevor Lawrence presumably leaving for the NFL Draft in 2021.

But could the two be reunited in the NFL if the right opportunity comes about? Well, according to a former NFL general manager and current ESPN analyst, Mike Tannenbaum, it could be something that happens within the next year.

Appearing on ESPN’s Get Up on Monday morning, Tannenbaum discussed reported speculation that a Dabo Swinney-Trevor Lawrence package deal could exist for the Jacksonville Jaguars, with the beleaguered NFL franchise — which has endured years of irrelevance after either missing on or getting rid of young talent — going after both the Clemson head coach and quarterback at the same time. Take a look at what the former New York Jets executive had to say.

“There’s a lot of speculation that Dabo Swinney, who’s been on the short list of multiple head coaching searches, could be a coach that teams want to talk about,” Tannenbaum said on Monday morning. “This would be the perfect storm and here’s why. He’s immensely popular in that area of the country and if he can go with Trevor Lawrence right down the road to Jacksonville, with all those picks and cap room, that’s the ideal situation. I know from talking to a number of NFL general managers, they see Dabo in the same mold as Pete Carroll. A high energy guy. Pete Carroll has been a coach in the college and the pros. If Dabo Swinney was going to do it, and that’s a big if, this would be the perfect situation… If Swinney would ever go, this would be the perfect storm to do it with, following this season.”

Who knows if this has any legs to it, but, given the relationship and success that Dabo Swinney has had with Trevor Lawrence as his quarterback — which includes back-to-back National Championship Game appearances (winning one), during the signal-caller’s first two seasons at Clemson — maybe it’s a real possibility. After all, the Jags are stuck in neutral, and don’t seem to have a real plan moving forward with the current coaching staff and/or roster. They recently released a young, talented Pro Bowl running back in Leonard Fournette, and seem to be giving a late-round draft pick, Gardner Minshew, a shot at the starting quarterback gig this season. Neither seem like a recipe for long-term success.

Assuming the Jags flop and win less than a handful of games in 2020, maybe they can lure Dabo from Clemson — especially if they land a top-3 pick in the 2021 NFL Draft, where Lawrence is projected to be selected. It sets up quite the intriguing situation, especially with so many question marks at the moment about the state of college football.

Then again, Dabo Swinney is making bank, is loyal and has created a family-like (and wholesome) atmosphere at Clemson, and it may be hard to duplicate that in the NFL. But, hey, we’ve seen successful college coaches take the plunge before, so maybe he’ll be the next high-profile guy to try it out.