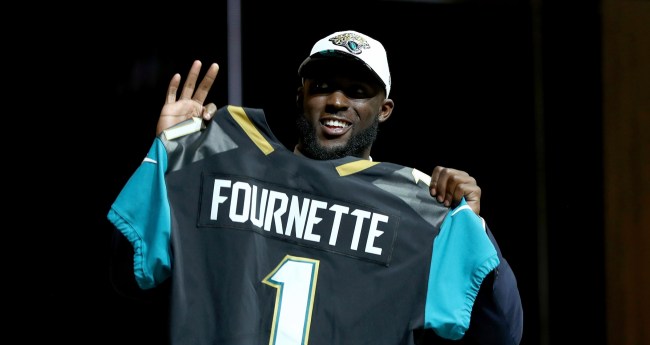 NFL fans were absolutely blown away by the shocking news that the Jacksonville Jaguars have cut their star 25-year-old running back Leonard Fournette. Then, once the shock began to wear off, they started making Trevor Lawrence jokes.

In case you are just getting up to speed here, the Jags waived Fournette Monday morning after reportedly trying to trade him.

Fournette is entering his fourth season in the NFL after rushing for over 1,000 in two of his three seasons in the league. In 2019, the former LSU star really ramped up his involvement in Jacksonville’s passing game, hauling in 76 passes in addition to rushing for 1,152 yards.

What many fans find so hard to believe is that after that season, easily Fournette’s best so far in the NFL, the Jaguars were unable to secure anything in trade for the 2017 number four overall pick.

We have waived RB Leonard Fournette.

Shortly after the news of Fournette’s release was announced, Jaguars head coach Doug Marrone said about the move, “At the end of the day, I’ve got to be able to field a team that gives us the best chance to win.”

Marrone also incredulously claimed that waived Fournette was made for on-field reasons and not for any issues the organization may have had with the running back’s attitude off the field.

The move leaves Jacksonville with Chris Thompson, Ryquell Armstead and Devine Ozigbo at running back.

NFL fans were not buying Marrone’s reasoning and think the team is actually just going into full tank mode in an effort to land the number one pick so they can draft Clemson quarterback Trevor Lawrence.

Gardner Minshew when he sees his team get dismantled and realizes they’re actively tanking for Trevor Lawrence pic.twitter.com/YGPqIBqB1R

If the Jaguars are secretly trying to tank for Trevor, they probably should have taken a look at their track record when it comes to making top five picks in the draft before doing so.

None of them last more than 5 seasons with the team. Major whiffs.

Trevor Lawrence seeing the dismantling of the Jaguars pic.twitter.com/JbCWFCYIG6