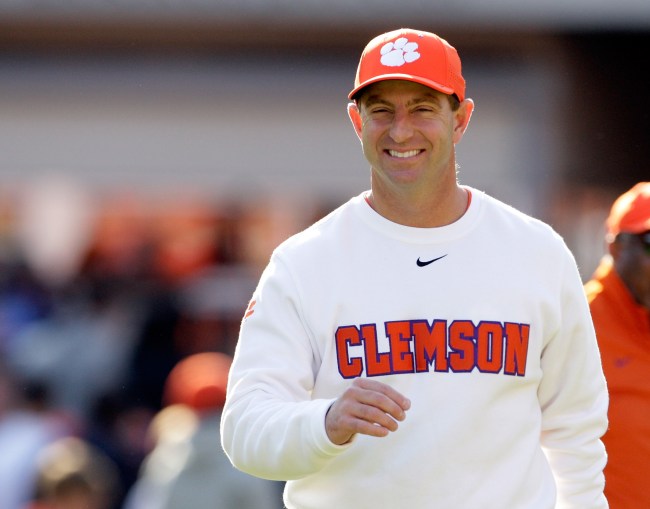 Dabo Swinney is one of the top college football coaches on the planet, with the Clemson Tigers head coach making his case for building the most dominant program in the country. Sure, there are others out there — namely Alabama and Ohio State, among others — but what Dabo has done to create a culture of winning and family has helped separate him from other places. It’s that belief that has led to success on the field, with the Tigers appearing in four of the past five College Football National Championship Games, winning two of them.

While Swinney is one damn good football coach — and paid handsomely for being one — he’s also really conservative. Don’t let his outgoing and joyous personality fool you, because as much as he enjoys talking and motivating his players, he doesn’t do it the way many other head coaches do, who often use profanity-laced pep talks. Instead, Dabo does things his own way, and it works well for him.

Considering Dabo Swinney doesn’t cuss much, it shouldn’t come as a surprise that he tries to limit his own players from doing the same. In fact, he’s such a stickler about cussing that the head coach only allows three swear words on the field during practice — and only because they’re the three included in the bible.

In a recent article from The Post and Courier, here’s what some of Swinney’s players said about the cussing policy, as well as which words are approved to use without the head coach getting upset.

Swinney has made an impression with an expletives outline of his own: The three cuss words you’re allowed to say while representing Clemson.

The policy isn’t necessarily among the primary reasons why the Tigers have been to the College Football Playoff five years in a row and won two of the last four national championships. But it is unusual.

And it is a program staple.

“We try to keep it clean at practice,” junior left tackle Jackson Carman said. “We know we have recruits or administrators or former players around.”

“Unless it’s in the Bible,” Carman said.

“It’s the right thing to do,” Swinney said when asked about the edict.

Damn, talk about a clean practice, huh? Dabo makes sure his players are on their best behavior at all times — or as much as they can be — and would rather have their play on the field speak for itself, not any cuss words coming out of their mouths. It’s an interesting tactic.

Of course, there are some violators to the rule, which causes a minor punishment.

“We really try to set a good example and our players try,” Swinney said. “Occasionally, you know, you just call them out. You say, ‘Hey, we don’t need that.’ Just try to make them think about it. Just try to articulate yourself a little bit better without some of that if we can. To make them better men.”

The penalty for violators who stray beyond the three words?

“In general, it’s just a slap on the wrist,” Bockhorst said. “People do a pretty good job of it. I don’t think it ever gets out of hand. I would say I just hope it doesn’t get out of hand.”

Say what you want to about Dabo Swinney’s (somewhat bizarre) cussing policy, but with a record of 59-5 in the past five years and a reputation as one of the best college football coaches in the country, if not the best, he does things his way; and it’s working wonders for him and the Clemson Tigers.