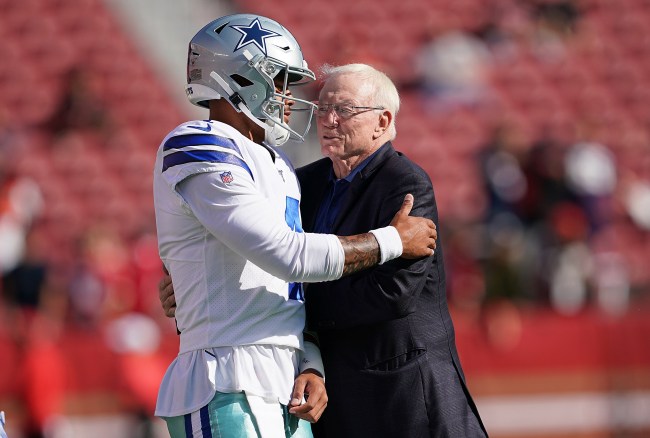 Dak Prescott will earn at the bare minimum $1 per second for the next four years after signing a cartoonish $160 million deal with the Cowboys, a record $126 million of which is guaranteed.

The deal is the manifestation of a two-year stare down between Prescott and owner Jerry Jones. Prescott scoffed at a reported $30 million per year offer in 2019 after the Seahawks shelled out $140 million to extend Russ and the Eagles dropped $128 million on Carson Wentz.

Now, nearly one year after his brother tragically committed suicide and Dak suffered a horrifying ankle injury, the Prescott family has something to celebrate.

When your little brother gets the call. Let’s go @dak time to win the @dallascowboys a Super Bowl. pic.twitter.com/PzlCKejTe5

Prescott’s father, Nat, added to the gravity of the deal with a quote to The Dallas Morning News.

Nat Prescott, Dak's dad to @SportsDayDFW "I am a lifelong Cowboy fan and I raised the kid a Cowboy fan. At five years old he told me he will be a quarterback for the Cowboys. I don’t think God gives you those types of gifts to make them incomplete." @dmn_cowboys

The support for one of the most respected figures in the league flooded in in the wake of the announcement.

Yo!!!!! @dak!!! Congratulations brotha well deserved… shit I feel like I got paid!!!

Man thinking about all Dak has been through over the last yr, with losing his brother, and have a horrific injury like that, to get the blessing he received yesterday. Absolutely incredible!! Love seeing great people win!! Congrats brotha!! 🙏🏾 @dak

Dak Prescott has never won a Super Bowl, a Super Bowl MVP, a regular season MVP, is coming off a broken ankle and he got this kind of money. I think it goes to show you that Dak Prescott and his representative won this negotiation. https://t.co/bd3HhZ8vf5

Time to go to work.

Dak Prescott | Now it’s time to get back to work!!! #GoCowboys pic.twitter.com/hnmVqDlmgn