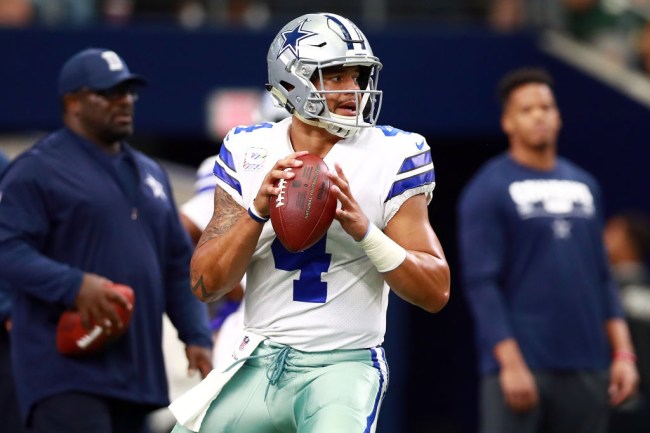 Dak Prescott is currently without a contract for next season and while he is in store for a monstrous payday, the specifics of his new contract are still up in the air.

According to the latest report from ESPN, Prescott is considering signing a short-term contract opposed to a long-term deal that the Cowboys would prefer instead. Per the report, Prescott could be looking to sign a very similar contract to Kirk Cousins’ three-year deal he signed with the Vikings worth $84 million. If Prescott does go that route he would hit the free-agent market again at the age of 29.

“One source suggested that Prescott might prefer to do a shorter-term deal than the traditional long Cowboys deal that allows them to keep restructuring for cap relief. If Prescott signed a Kirk Cousins-style three-year deal, for example, he’d hit free agency again at age 29. Prescott might also be waiting to see whether the Texans extend Deshaun Watson this offseason, and then he could work off of that deal if it establishes new quarterback standards.”

The deadline for a new deal is March 12, but if an agreement isn’t reached between Dallas and Prescott, the Cowboys will franchise tag him.

There is one way the #Cowboys can make sure Dak Prescott doesn't go anywhere & that’s to give him the exclusive franchise tag. Sources say that’s the tag — roughly $33M — they are likely to use. Dallas will try to work out a deal before the deadline, but that will be difficult. pic.twitter.com/kfCkPR1NE8

Prescott has never missed a start for the Cowboys over his four-year career and is fresh off of a career season with 4,902 passing yards and 30 touchdowns.

The Cowboys also have a decision to make regarding Amari Cooper who is also without a contract for next season. Jerry Jones and the Dallas front office will be very busy over the next few weeks and likely writing ginormous contracts to each of the two Dallas stars.