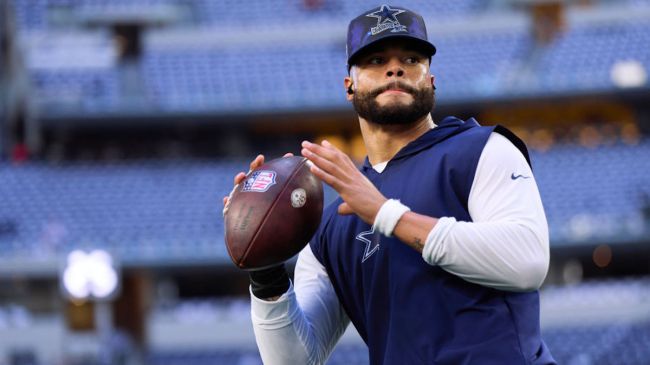 While Dak Prescott hasn’t quite reached Jameis Winston levels of comedy when it comes to the absurdity of his workouts and pregame routines, he has developed a move that’s become so recognizable that someone down in Dallas turned it into a Halloween costume.

Over the weekend in Dallas, a dude was spotted rocking a white Dak Prescott jersey, over-the-ear headphones, and a Cowboys towel hanging on his waistband as he did the QB’s silly warmup routine across the bar.

The video of the routine was so funny that a tweet “hoping he did this all night everywhere he went” racked up over 30,000 likes on Twitter.

lol i hope he did this all night everywhere he went pic.twitter.com/DNTd8oYlQ8

Despite his silly pregame routine, Prescott and the Cowboys have been anything but this season as Big D currently sits at 6-2 and is undoubtedly one of the best teams in an unusually weak NFC (at least right now).

On Sunday, which was Prescott’s second game after returning from injury, the Cowboys whooped upon the Chicago Bears, beating them by a score of 49-29. As for Dak, he completed 21 of 27 passes for 250 yards, two touchdowns, and one interception.

RELATED: The Otherwordly Micah Parsons Has Made An Eye-Opening Demand To Cowboys Coaching Staff After Wild Defensive TD Against The Chicago Bears