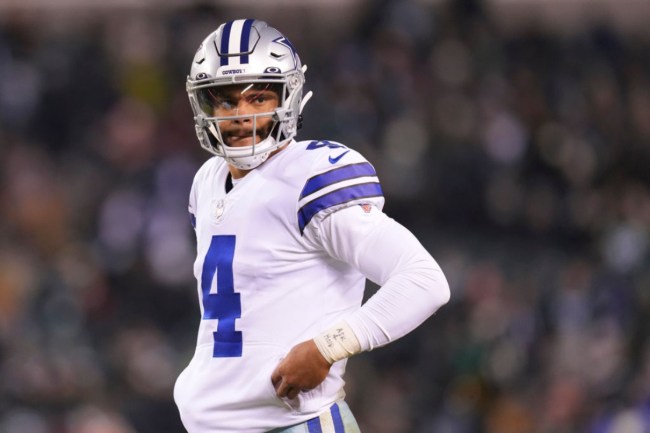 Dak Prescott is going to be on the receiving end of some extremely tough criticism for quite a while following the Cowboys’ playoff loss to the 49ers. Cowboys fans, and certainly Cowboys haters, won’t let Prescott hear the end of it until he avenges himself in a future playoff game if we’re being honest.

How some fans are reacting to Prescott’s nice gesture for the Dallas practice squad is a prime example of that.

After the very questionable final play of the Cowboys’ season, and with every NFL fan and Dallas fan criticizing Prescott, the coaching staff, and the officials, the QB still made it a point to thank the team’s practice squad.

According to Mike Leslie of WFAA, following the team’s loss to San Francisco, Prescott asked players to throw in $500 so they could give it to the practice squad players. Those on the practice squad don’t get paid the same during the playoffs as they normally do during the regular season.

Prescott could have easily forgotten about the practice squad. The fact that those players even crossed his mind after his team’s season just ended the way it did is honestly remarkable, but some NFL fans didn’t exactly see it that way.

If we’re really being honest, Prescott could’ve come out and said that he had just solved world hunger after the loss to the 49ers and people still would have criticized him.

Some fans pointed out that $500 is chump change to every active player and that Prescott should have asked for much more, while others simply called him out for being a poor leader.

He's also the type of leader that wants to give credit to the fans for throwing trash at the officials. https://t.co/H2zntIXWDl

Didn’t he get an overinflated contract recently? He can do more than $500 https://t.co/bOcoCWyLdi

And then he blamed refs and applauded the fans for throwing crap 😂😂😂😂😂 stand up dude https://t.co/0zOU2V754j