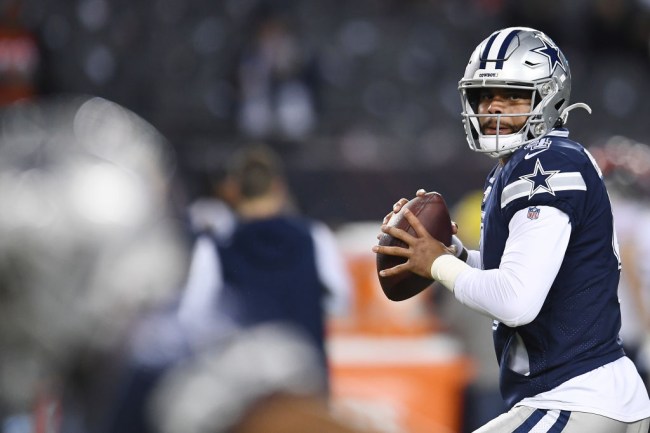 Following the Cowboys’ massive, season-saving 44-21 win over the defending NFC Champion Rams, things started to be looking up in Dallas for the first time after a tumultuous month that saw them lose three straight games.

Headed into this weekend’s game against the Philadelphia Eagles, the Cowboys find themselves with the inside track of winning the NFC East, as they’re not only favored in the game itself but would then be favored to win the division in its entirety if they pulled out the win.

However, unfortunately for Dallas — who were three-point road favorites heading into today — they have received some troubling news prior to this weekend’s crucial NFC East matchup: star quarterback Dak Prescott’s shoulder is not “functioning” properly following an MRI.

According to head coach Jason Garrett, Prescott was limited in practice on Wednesday due to a right shoulder injury that made it “hard for him to function.”

Dak Prescott had a MRI on his right shoulder and Jason Garrett said it’s hard for him to function right now.

The injury could not come at a worse time for the Cowboys, as the winner of this weekend’s matchup against the Eagles will likely determine the winner of the NFC East. Not only that, but Jason Garrett is likely coaching for his future, as anything short of an NFC East title will likely see the longtime Cowboys coach lose his job.

The Cowboys, who currently sit at 7-7, head to Philadelphia to take on Carson Wentz and the 7-7 Eagles on Sunday at 4:25 p.m. EST. At this time, Dak is expected to play, although that could change in the coming days.