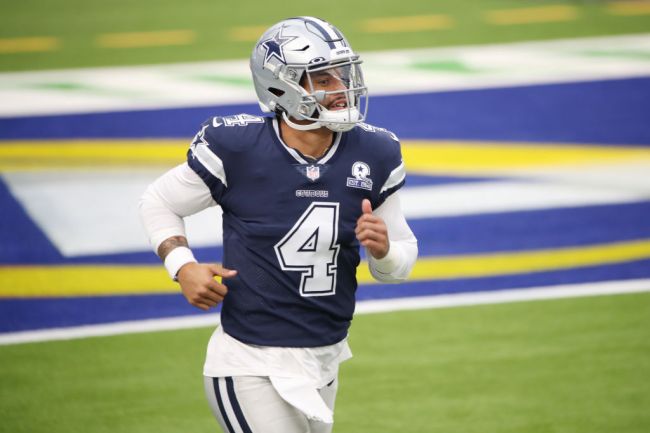 Dallas Cowboys quarterback Dak Prescott shared some honest admissions about the COVID-19 vaccine while also declining to say whether he had been vaccinated or not. He made it clear that getting vaccinated is a personal choice.

Prescott isn’t the only player in the NFL to share this approach but is certainly the most noteworthy thus far to share this type of outlook toward the vaccine.

The 27-year-old isn’t looking to promote the vaccine nor is he looking to tell folks not to receive it, he just hopes people educate themselves before putting something “foreign” into their bodies.

“For me, I think it’s important just for everybody to educate themselves on the reason of why to get vaccinated and why it can either help in their cause or maybe help the world but it’s not necessarily something I’d like to share or something I’d like to promote or say,” Prescott explained to KXAS.

“Because when you’re putting in a vaccination, obviously you’re putting something that’s foreign, that obviously the experts put together and made the decision that that’s the best way to go about it but it’s all up to your belief and I’m not the one to try to move people and tell them, ‘Hey, you need to do this, you need to do that because we all react [individually] to everything.”

LeBron James took the same approach during the NBA season when asked about his vaccination status, saying that it would be a conversation between him and his family.

Is The NFL Mandating The Vaccine?

The NFL has not mandated the vaccine for players and staff, but its updated policy certainly has major incentives built in for those that are vaccinated. Those that decide not to get vaccinated have to abide by the same protocols put into place last season, while vaccinated players will operate normally.

According to a recently agreed-upon letter between the NFL and NFLPA, unvaccinated players who test positive for COVID-19 may not get paid, while any vaccinated player that tests positive wouldn’t run the risk of missing out on a paycheck.

Per the NFL Players Associations, unvaccinated players must wear masks and be subject to daily COVID testing, may not eat with their teammates, be subject to travel restrictions, not leave their team hotels, and are even forbidden from engaging in social media, marketing, and sponsorship activities.

Buffalo Bills wide receiver Cole Beasley has been the most vocal against the league’s decisions going on a Twitter rant calling out the NFLPA.