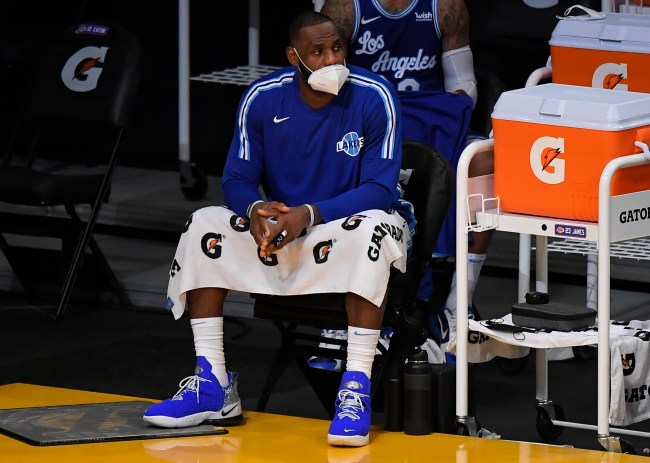 Adam Silver’s attempt to sexify the COVID vaccine among the league’s most prominent figures has been received about as well as a poopy diaper. While guys like Bill Russell, Kareem Abdul-Jabbar and Gregg Popovich have participated in the NBA’s public service announcements to normalize the vaccine, in this league, the buck always stops at King James.

LeBron caused quite the stir over the weekend when he refused to offer support of the COVID vaccine, which is said to be 95 percent effective.

“That’s a conversation that my family and I will have. Pretty much keep that to a private thing,” James said. “Obviously I saw Adam had his comments about the vaccination. But things like that, when you decide to do something, that’s a conversation between you and your family and not for everybody. I’ll keep it that way.”

LeBron’s comments shine light on a greater phenomenon in the black community about vaccine mistrust rooted in structural racism, which is partly why black Americans are being vaccinated at significantly lower rates than white people.

James Harden says getting the COVID-19 vaccine is something he's still thinking about.

Yes, but no one going to rush when your healthy and young without enough research. The FDA hasn’t even approved it yet I believe.. I think it takes for a year of data for that https://t.co/NZArYnyu5L

According to recent Kaiser Family Foundation poll, about 35% of Black Americans said they don’t plan to get the vaccine, citing fears about safety and concerns that the vaccines are so new. I can’t imagine LeBron’s lukewarm reception of the vaccine will bump those numbers any higher.

The response on the world wide web, as is typical, was confrontational.

This certainly doesn’t help the cause. First, we are still using the word “take.” Second, people adore what LeBron has to say. Third, he speaks out on just about *anything* else. https://t.co/Hu8JuGfS7v

This isn't the topic to tip-toe around. You have the power to be a serious role model here on an issue that's become way more tense in our culture than it needs to be and right now, any answer besides "yes" is being taken as a "no" by those who want to hear it. https://t.co/59TSg6O9hm

LeBron is someone who could really help with people on the fence on the vaccine and this just sucks. https://t.co/nK100Qpe4O

LeBron does a lot of good for people, but this is decidedly not good. People in the position of influence need to take the vaccine and let everyone know they're doing it. If it convinces any amount of people to do likewise, it's worth it. https://t.co/porB1aNP5e

my interpretation is that there’s power in lebron saying he’s getting the vaccine and that he wants to wield this leverage against the NBA in whatever way he can.
lebron’s too smart to be an anti-vaxxer. https://t.co/jc4KToXVg6

Stick that needle in my ass. I wanna dance this summer.