We Talked to Dale Earnhardt Jr. About Seizing Great NASCAR Moments And His Work With MTN DEW Supporting Team Rubicon 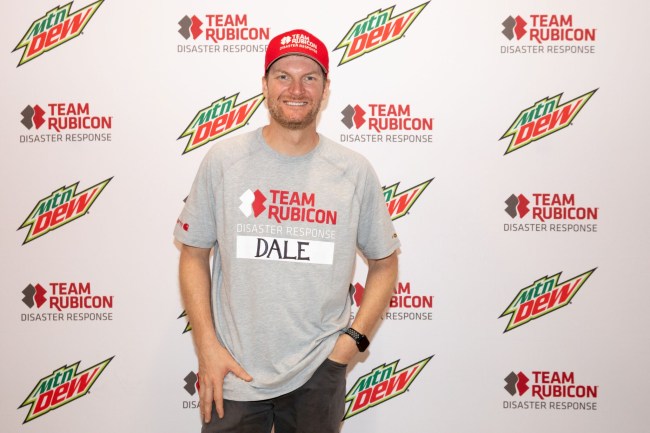 It’s the middle of February and you know what that means: The NASCAR season kicks off this weekend for the 61th running of the Daytona 500. It wouldn’t be Daytona weekend without motorsports icon Dale Earnhardt Jr around the track, these days covering the race for NBC Sports with a headset on instead of a helmet behind the wheel. And this year he’s doing something awesome with his long-time sponsor, MTN DEW.

Dale Jr. is teaming up with his long-time sponsor, MTN DEW, to be the spokesperson for a campaign supportingTeam Rubicon. DEW recently pledged a $1 million donation to support Team Rubicon, an organization that connects military veterans and first responders to volunteer in disaster relief areas. The organization utilizes the skills of these highly trained professionals in the areas that need it most, especially in the wake of natural disaster.

“Team Rubicon is an extraordinary organization, and we are honored to partner with them and leverage our platform to raise awareness of its mission to aid in disaster-stricken areas,” said Nicole Portwood, vice president, marketing, MTN DEW, in a press release. “The volunteers of this great organization, many of them military veterans, continue to serve our country through disaster response teams. They are the true embodiment of what it means to ‘DO THE DEW,’ and we want to fuel that fire in all of DEW Nation to support this worthy mission.”

In a press release, Earnhardt Jr. offered some personal words of support for the mission at hand. “Natural disasters have hit close to home for me – like Hurricane Florence’s impact on the Carolinas. Team Rubicon was there to support and rebuild those affected areas, and I’m proud to team with Mountain Dew to support its mission.”

Between now and March 24, all us common folk can help support Team Rubicon via the purchase of DEW Nation Rewards Team Rubicon store and in return earn exclusive MTN DEW x Team Rubicon rewards and gear, including t-shirts, backpacks, sleeping tents. The biggest Team Rubicon supporters can even win a race-day experience with Dale Earnhardt Jr. Look for the special MTN DEW Rubicon bottles at participating locations. Then redeeming for points at www.DewNationRewards.com/TeamRubicon. 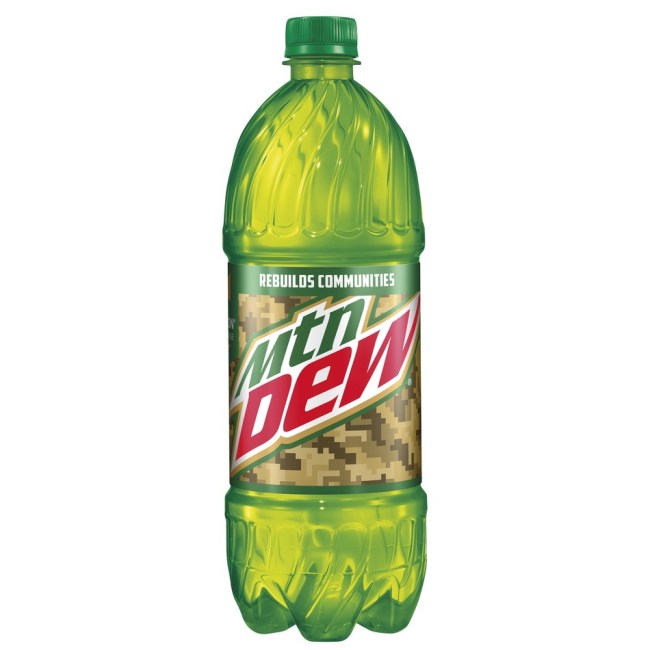 In a press release, Jake Wood, Co-Founder and CEO of Team Rubicon, offered his praise for the partnership. “We’re honored and humbled by this major commitment from MTN DEW in support of our mission. DEW’s contribution will enable us to train more volunteers in critical skills, respond to more disasters around the world, and help more people on their worst day. Like Team Rubicon, we know Dew Nation has a bias for action and we’re excited to see how they’ll step up to match DEW’s $1 million commitment to our mission.”

Before the Daytona 500, Dale Jr. linked up with Team Rubicon to help out with it’s ongoing volunteer relief effort in the Florida Panhandle, helping to rebuild a community ravaged by Hurricane Michael in the fall of 2018.

Bro moves all around. Earlier this week, I got a chance to jump on the phone with Dale Jr before heading down to Daytona myself. In addition to his volunteer work with Team Rubicon, we chatted about his overall excitement for the changes to NASCAR over next few years.

“There’s a lot of things to be excited about,” Dale Jr tells BroBible. “NASCAR just had a recent announcement of many things they’re going to be doing. One of the things that stood out to me is the changes in 2021 to the race cars. That to me is a really, really important opportunity for NASCAR to be able to design or develop cars that are more similar and recognizable to the cars that we’re seeing on the street.” 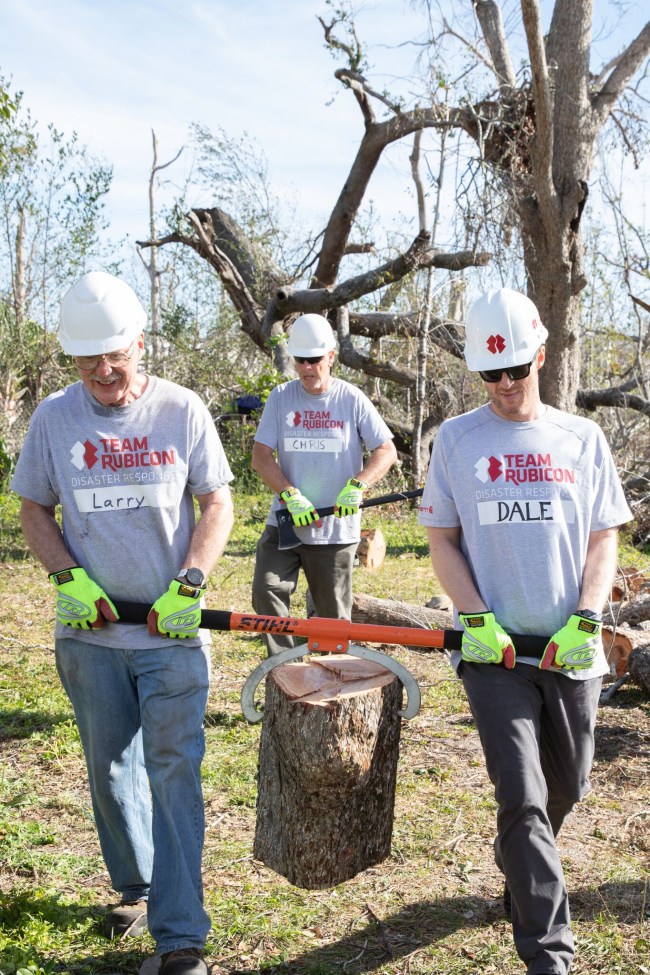 “When I went to the 24 hours Le Mans, there’s a lot of people there that are supporting their corporate sponsors, because there’s a lot of corporate sponsors involved. But there’s also a major influential people that are dedicated and loyal to the manufactures of all these cars. You have fans of BMW, fans of Corvette. There are big crowds of Porsches and BMWs, all who drove their cars there. Now they’re now going to pull Porsche team.”

“We had that in motorsports years ago with Chevy and Ford. There was a really stark division and dedication to the manufacturers among the fan. We’ve lost that as NASCAR cars went away from what their production counterparts look like.”

“We went to a common template in a common car, then all the cars just look the same aside from a few decals. So we lost that manufacturer connection. And manufacturer support and connection is so important to the support – We need them to be there.

“There’s the old adage of win on Sunday and sell on Monday.A car wins a race on the race track and then you can sell the cars at the car dealership. We got to get that back. That’s our livelihood, that’s our bread and butter.” 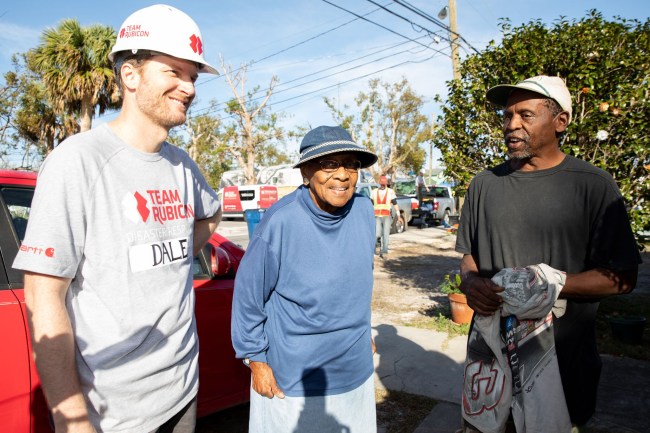 “So the fact that they’re going to design new generation car in a couple years and give it life to model after actual production cars, I think is the great move and I’m hoping that it succeeds. I think that will be incredible.”

“We also have a package of new horsepower, new dynamics, and so forth coming in to the series next year. I think it’s gonna be compelling. I think it’s going to make the racing even better in some cases, really similar to what we saw last year.

It’s gonna exciting. It’s gonna be a great year. I can’t wait to see and start.

There have been a lot of great storylines with the next generation of NASCAR talent out there. I was actually at that race at the Watkins Glen race where Chase Elliott finally won a cup race. That was such an amazing moment for NASCAR – Just a jolt of excitement for the entire sport. Being there to see it firsthand was so cool.

Anything like that in particular that you’re rooting for in 2019?

Dale Jr: Man, you talked about that feeling that you had seeing Chase win at Wakins Glenn. We all felt that.

That’s what I want. We all want more of those moments. When I got hired by NBC, my office told me that we need to create moments. “Moments, moments, moments!” And we use that word all the time.

I feel so great about what was happening for the sport.

You know, I have guys that are nice and guys that are friends and even guys that maybe I didn’t get along with as driver. For me now, I’m trying to create perpetual relationships with all these guys as a broadcaster, trying to earn their respect. I’m trying to work with them and support them, and showcase their talent and personality.