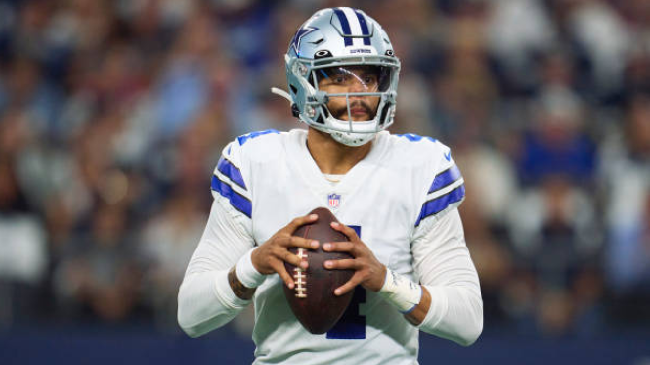 This weekend was an absolutely brutal one for the Dallas Cowboys. They opened their season in primetime on Sunday and were embarrassed at home by the Tampa Bay Buccaneers. They lost the game 19-3, making them the only team in the NFL that didn’t score a touchdown in Week 1.

Unfortunately for the Cowboys, the result of the game was far from the biggest concern to arise from Sunday’s awful performance. Dak Prescott suffered an injury to his right thumb that required surgery and now he’ll miss a chunk of the season for the Cowboys.

With Dak expected to miss 4-6 weeks and Cooper Rush as the next man up at the position, football fans began to wonder if the Cowboys could make a move for somebody to fill in during Prescott’s absence.

According to a report from ESPN’s Jeremy Fowler, the Cowboys have no plans to make a significant move at the position and will instead ride it out with Rush until Dak returns,

As of now, #Cowboys do not plan to pursue significant trade for a QB barring unforseen change, per source. Cowboys won't take any possibility completely off table, but with Dak Prescott's improved timeline and Cooper Rush's familiarity with offense, team feels it can be patient

The Cowboys find themselves in kind of a weird spot with Dak’s injury. The idea that he could be back after 4 weeks makes it difficult to justify trading too much for a viable replacement. On the other hand, there is the very real possibility that the Cowboys could be 0-5 by the time he is ready to return.

That would make it very difficult to find their way into the playoffs this season, but for now, it seems like it’s a risk the Cowboys are willing to take.