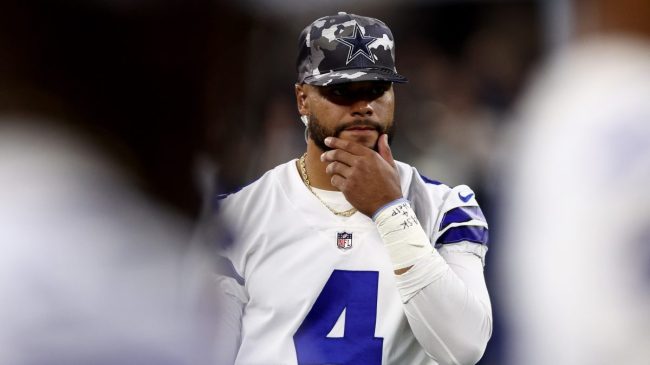 Dak Prescott returned to an elite level for the Dallas Cowboys in 2021. One year after suffering a gruesome ankle injury that cost him most of the 2020 season, Prescott threw for 4,449 yards, 37 touchdowns and just 10 interceptions to lead Dallas to an NFC East Division Title.

He’s has his work cut out for him in 2022, however. The Cowboys stripped their wide receiver corps to the bones in the offseason and the offensive line situation doesn’t look much better. That’s especially true after eight-time Pro Bowler Tyron Smith suffered a hamstring injury that may cost him the entire season.

Logic would tell you Dallas would want to have a solid insurance policy for Prescott in 2022. But this is Jerry Jones’ team, which means all logic goes right out the window.

Tuesday marked the NFL deadline for team’s to make final roster cuts. But the end of the league day, teams had to be down to 53 players on their roster. This led to a number of eye-opening cuts across the league. But perhaps none were more eye-opening than a pair of moves by the Cowboys.

ESPN’s Todd Archer reported Tuesday afternoon that had cut not one, but both of Cooper Rush and Will Grier. Rush and Grier were the only quarterbacks other than Prescott on the roster.

The Cowboys are keeping one QB on the 53-man roster for the time being: Dak Prescott. Cooper Rush and Will Grier have been released, according to sources. Rush does not go through waivers; Grier does. Likely both will be back in some form – PS or active – to serve as backup.

On its face this looks like a crazy move. But Archer quickly clarified that the moves may only be a temporary decision.

Don't be alarmed. It's roster manipulation at the moment to be prepared for moves to come over the next few days. They can have a wink-wink deal with Rush since he's a vested vet. Grier would be back if unclaimed as well.

In fact, the roster gymnastics are fairly common across the NFL.

Many of these moves by teams today are ways to work around the 53-man roster limit. In effect, they are going with 56-57-man rosters with how practice squad callups now work these days.

Rush served at the Cowboys’ primary backup quarterback in 2021. He started one game against the Minnesota Vikings, going 24-of-40 for 325 yards, two touchdowns and an interception in a 20-16 victory.