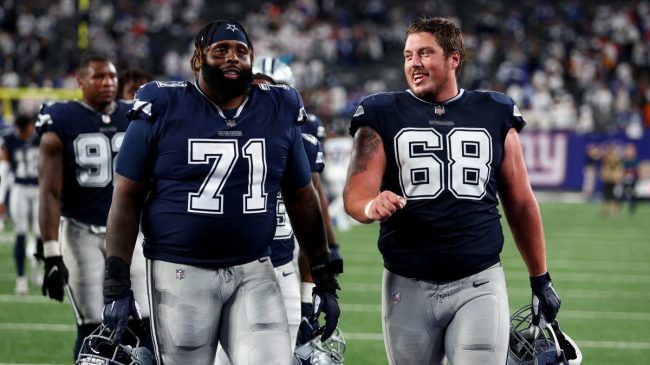 The Dallas Cowboys just can’t seem to shake the injury bug in 2022.

The issues began before the season even began and date all the way back to the end of 2021. Starting wide receiver Michael Gallup began the season on the injured list while recovering from a torn ACL. Then projected starter in the slot, James Washington, broke his foot in the preseason. A potential season-ending injury to future Hall of Fame left tackle Tyron Smith exacerbated the issue.

But the issues came to a head in week one when start quarterback Dak Prescott broke his thumb against the Tampa Bay Buccaneers. The injury has cost him at least four games and could still cost him more.

Slowly but surely, Dallas has begun to get players back. Gallup returned in week three against the Giants. Then left guard Connor McGovern returned a week ago from a high ankle sprain.

The luck didn’t last long, however.

When Smith initially went down, the Cowboys went on the search for solutions. They found one in the form of another future Hall of Famer. Dallas signed nine-time Pro Bowler Jason Peters off the free agent list.

Peters, who made his name at left tackle, played left guard in each of the last two games. He’s also served as a mentor for first-round pick Tyler Smith, who made the move to left tackle when Tyron Smith went down.

Now Peters, who rotated snaps with McGovern a week ago, is headed for the injured list as well.

Cowboys veteran OL Jason Peters suffered a chest injury that could cause him to miss multiple games. Peters played 14 snaps in Week 3 and 21 in Week 4. Cowboys were hopeful he could get more snaps this week. Now, it appears Connor McGovern will get the majority of work at LG

Dallas fans couldn’t believe it was happening yet again.

Here we go. Never fails. Nothing ever easy with this team. #Cowboys https://t.co/FDrnS2akBt

With Peters on the shelf, McGovern likely gets called into the action full-time. But don’t worry, he’ll get to ease his way into things when the Cowboys take on Aaron Donald and the Super Bowl champion Rams on Sunday.