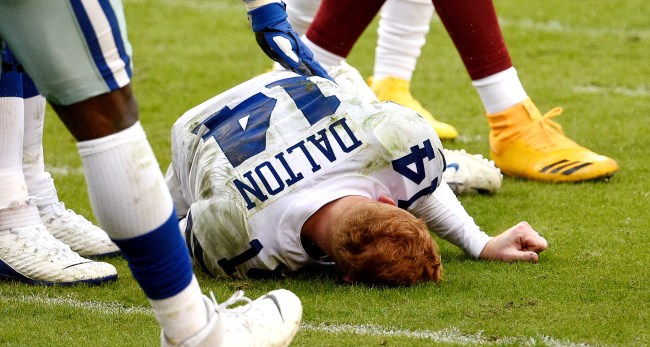 At 2-5, the Dallas Cowboys are still somehow, miraculously only half a game out of first place behind the Philadelphia Eagles in the abysmal NFC East.

Despite this fact, some people within the Cowboys organization including players, coaches, and ownership, are starting to get more than a little testy.

Don’t count Cowboys executive vice president Stephen Jones among them though. According to him, Dallas pretty much has things well in hand.

During his weekly appearance on “K&C Masterpiece” on 105.3 The Fan, Jones says he still fully supports head coach Mike McCarthy and the rest of the coaching staff.

“I just think you’re going to take your lumps with a new staff when you’re trying to learn,” said Jones. “As we said, every team went through it, but we had unprecedented circumstances for new staff to come in and get their hands around a team and really start to implement a new culture, implement new systems, all of those things were a bigger challenge this year.

“And then, of course, as you say, when you think you’re going to be lining up out there with All Pros on the offensive line and you’re looking at lining up with some college free agents and some guys like that, that’s a challenge, no question. So, I think we’re going in the right direction.”

“I think Coach McCarthy and his staff, it’s going to take time for them to implement what they do and the way they play. We put a lot of work in coach McCarthy and what his track record was and how his teams played. They weren’t one in, one out, one in. They were in the playoffs, like I said, 10 out of 11 years. Mike brings consistency to the table and it will ultimately happen here.

“We completely understand and we understand there’s going to be criticisms and questions until we start to put a product on the field that deserves to start to eliminate some of those question marks and criticism.”

Let’s try to decipher what Stephen Jones said there.

The Cowboys are taking their “lumps with a new staff.” So, what the staff is trying to do isn’t working… yet.

“It’s going to take time for them to implement what they do.” Again, not working… yet.

But, they’re “going in the right direction.”

The Dallas Cowboys are the third-worst team in football, according to FPI. Only ahead of the Jets and Jaguars.

Jones added, “Jerry and I are big believers in sticking with a staff and we just got to give them their opportunity to work these guys and continue to implement what they’re trying to get accomplished and ultimately we’re going to have a good football team.”

They can’t get much worse. Especially on defense where the Cowboys have allowed a league worst 1,248 yards rushing (178.3 per game) on 5.2 yards per carry to go along with a whopping 34.7 points allowed per game. So sure, technically, this coaching staff will improve as time goes on. There’s nowhere to go but up.